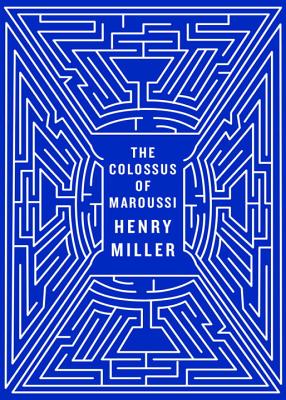 The Colossus of Maroussi

Henry Miller, Will Self (Introduction by), Ian S. MacNiven (Afterword by)

Henry Miller’s landmark travel book, now reissued in a new edition, is ready to be stuffed into any vagabond’s backpack.

Like the ancient colossus that stood over the harbor of Rhodes, Henry Miller’s The Colossus of Maroussi stands as a seminal classic in travel literature.  It has preceded the footsteps of prominent travel writers such as Pico Iyer and Rolf Potts. The book Miller would later cite as his favorite began with a young woman’s seductive description of Greece. Miller headed out with his friend Lawrence Durrell to explore the Grecian countryside: a flock of sheep nearly tramples the two as they lie naked on a beach; the Greek poet Katsmbalis, the “colossus” of Miller’s book, stirs every rooster within earshot of the Acropolis with his own loud crowing; cold hard-boiled eggs are warmed in a village’s single stove, and they stay in hotels that “have seen better days, but which have an aroma of the past.”


Praise For The Colossus of Maroussi…

One of the five greatest travel books of all time. (Pico Iyer)

Miller captures the spirit and warmth of the resilient Greek people in his story of a wartime journey from Athens to Crete. (National Geographic)

Miller’s Colossus of Maroussi, a paean to Greece drawn out of a nine-month visit…is the gestation time for a human and, in Miller’s case, for the imaginative re-creation of a country, a culture and his own fierce energies. (Richard Eder, The New York Times)

Henry Miller (1891—1980) was one of the most controversial American novelists during his lifetime. His book, The Tropic of Cancer, was banned in the some U.S. states before being overruled by the Supreme Court. New Directions publishes several of his books.

Will Self is the acclaimed author of several novels, short story collections, and novellas. His books include Umbrella, Great Apes, and Phone.