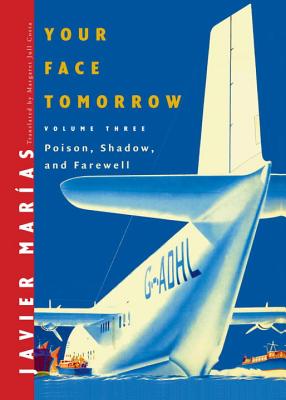 Praise For Your Face Tomorrow: Poison, Shadow, and Farewell…

Poison, Shadow and Farewell delivers a payoff at the end, but the real challenge, and pleasure, is in getting there.

This brilliant trilogy must be one of the greatest novels of our age.
— Antony Beevor

Like so much of Marías's extraordinary writing, it is unforgettable.
— Margaret Drabble

The strange mixture of high cultural references and Jaques' essentially thriller-like story line, make for a reading experience like no other.

This novel…crowns Marías's trilogy and his translator's lively English rendering of it with narrative honor.
— John Spurling

Like the other volumes in the sequence, Poison, Shadow and Farewell is as stealthy as any spy.

Quite unlike anything else today…. One of the finest novels of modern times.
— Tim Martin

A literary tour de force ... as much about the past from which we are made as the present we have become.

The conclusion…is to be reminded of the intricacy with which he has fitted his pieces into the larger part.
— Colin Torre

Marías's own seemingly infinite imaginings broaden and complicate the novel form—illuminating the undersides of the past and its characters.
— David Haglund

This talented and prolific "new Proust" has completed the third book of his monumental trilogy.... The long sentences and paragraphs dear to Marias, a wordsmith translator of Sterne's Tristram Shandy as well as works by Faulkner, Conrad, and Nabokov, are a delight to navigate as the author pursues with surgical precision his relentless quest to discover what motivates the actions of his characters. Recommended.


His most moving and personal work to date.
— Megan Doll

The fear and pain that Marías has built up for a thousand pages oozes out like oily fate.
— Justin McNeil


The overall effect recalls the cerebral play of Borges, the dark humor of Pynchon, and meditative lyricism of Proust.”


He mediates thriller or noir scenarios through a formidably erudite and elegant and sophisticated consciousness.
— Mark Ford

Here's the wonderfully parenthetical operations of a human mind in the 21st century.
— Mauro Javier Cardenas

A seriousness of purpose, an eagerness to engage with ... metaphysical questions and to incorporate them into a gripping story.
— Tess Lewis