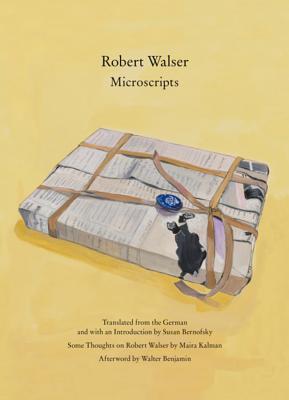 Now in a gorgeous new paperback edition with full-color illustrations by Maira Kalman, Microscripts is a one-of-a-kind masterpiece.

Robert Walser wrote many of his manuscripts in a highly enigmatic, shrunken-down form. These narrow strips of paper, covered with tiny ant-like pencil markings a millimeter high, came to light only after the author’s death in 1956.At first considered random restless pencil markings or a secret code, the microscripts were in time discovered to be a radically miniaturized form of antique German script: a whole story was deciphered on the back of a business card. These twenty-five short pieces address schnapps, rotten husbands, small town life, elegant jaunts, the radio, swine, jealousy, and marriage proposals.

The use of throwaway scraps and pencil also seems part of a deliberate espousal of the small and modest, an attention to the unnoticed, and the microscripts are, as this edition lets us see, objects of beauty, the pencillings precisely filling their allotted space, the different texts neatly fitted together on the same piece of paper like some kind of intricate insect construction whose purpose is absolutely necessary.... Walser has in recent years regained some of the status he enjoyed in the 1920s. Instead of Kafka and Benjamin, we have Sebald and Lydia Davis championing him. But we still don't know where we stand with him. Are we dealing with pure literature,the vagaries of the everyday, jokes, or empty fancies? The writing is radical and elegant enough to encompass all these possibilities and many more. Is it the stuff of life? Perhaps.
— The Times Literary Supplement

Susan Bernofsky is the acclaimed translator of Hermann Hesse, Robert Walser, and Jenny Erpenbeck, and the recipient of many awards, including the Helen and Kurt Wolff Prize and the Hermann Hesse Translation Prize. She teaches literary translation at Columbia University and lives in New York.
Loading...
or
Not Currently Available for Direct Purchase