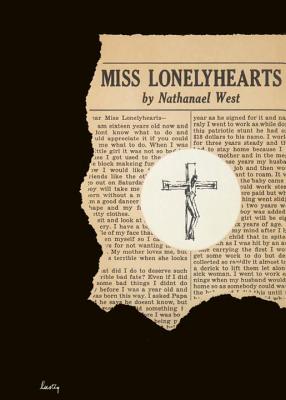 A writer’s nightmare: his degrading day job as a lonely hearts advice columnist is only the beginning

Praised by great writers from Flannery O’Conner to Jonathan Lethem, Miss Lonelyhearts is an American classic. A newspaper reporter assigned to write the agony column in the depths of the Great Depression seeks respite from the poor souls who send in their sad letters, only to be further tormented by his viciously cynical editor, Shrike. This single volume of Miss Lonelyhearts features its original Alvin Lustig jacket design, as well as a new introduction by Harold Bloom, who calls it “my favorite work of modern American fiction.”

In dark times, Miss Lonelyhearts shines the brightest light in the blackest places. For this reason West’s novel has never felt more alive than today.

In 1940, when an automobile accident prematurely claimed Nathanael West's life, he was a relatively obscure writer, the author of only four short novels. West's reputation has grown considerably since then and he is now considered one of the 20th century's major authors. Born in New York, West worked as the night manager of the Kenmore Hotel on East 23rd Street in Manhattan, as a contract scriptwriter for Columbia Pictures in Hollywood, and as a screenwriter for RKO Radio Picture.

Harold Bloom is Sterling Professor of the Humanities at Yale University. His many distinguished books include The Anxiety of Influence (1973, 1997), The Western Canon (1994), Shakespeare: The Invention of the Human (1998), and How to Read and Why (2000).
Loading...
or support indie stores by buying on