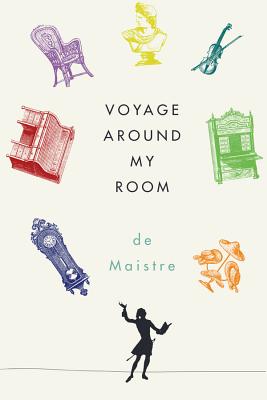 Voyage Around My Room

In 1790, while serving in the Piedmontese army, the French aristocrat Xavier de Maistre (1763–1852) was punished for dueling and placed under house arrest for forty-two days. The result was a discursive, mischievous memoir Voyage Around My Room, and its sequel, Nocturnal Expedition Around My Room. Admired by Nietzsche and Machado de Assis, Ossian and Susan Sontag, this classic book proves that sitting on the living-room sofa can be as fascinating as crossing the Alps or paddling up the Amazon.


In addition to the Voyage and Expedition, this edition also includes the dialogue “The Leper of the City of Aosta,” a preface by Xavier’s better-known older brother (the royalist philosopher Joseph de Maistre), and an introduction by Richard Howard.


Praise For Voyage Around My Room…

De Maistre pioneered a mode of travel that was to make his name: room travel. Dressed in pink-and-blue pajamas, satisfied within the confines of his own bedroom, Xavier de Maistre was gently nudging us to try, before taking off for distant hemispheres, to notice what we have already seen.
— Alain De Botton

The late eighteenth century is when modernity (more exactly, the modernities) began. Sterne, Diderot, Rousseau—among the effortlessly brilliant writers of that incandescent era, there still remains Xavier de Maistre to discover or rediscover. His masterpiece, Voyage Around My Room, is one of the most original and mettlesome autobiographical narratives ever written.

Xavier de Maistre (1763–1852) was a French military man and writer. He began serving in the army at a young age, and lived primarily in Italy, but eventually moved to St. Petersburg, where he died.

An award-winning translator and poet, Stephen Sartarelli lives in France.

Joseph de Maistre was a philosopher, writer, lawyer, and diplomat.
or support indie stores by buying on
(This book is on backorder)