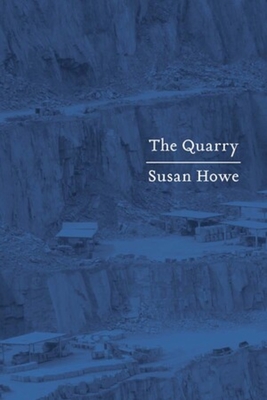 A powerful selection of Susan Howe's previously uncollected essays, The Quarry moves backward chronologically, from her brand-new "Vagrancy in the Park" (about Wallace Stevens) through such essential texts as "The Disappearance Approach," "Personal Narrative," "Sorting Facts," "Frame Structures," and "Where Should the Commander Be," and ending with her seminal early criticism, "The End of Art." The essays of The Quarry map the intellectual territory of one of America's most important and vital avant-garde poets.


Praise For The Quarry: Essays…

Reaching back through Hawthorne, Dickinson and beyond, Susan Howe taps a stream of American thinking that is as as clear and fresh as a draught of well water. She is our conscience, our voice, our song.
— John Ashbery

No other poet now writing has Howe's power to bring together narrative and lyric, scholarship and historical speculation, found text and pure invention.
— Marjorie Perloff

Universally recognized as a major poet, Susan Howe should also be known as the most innovative, the most thrilling essayist writing today.
— Eliot Weinberger

Marvelous with a visionary apprehension of what is to come, telepathic communication with past poetries, histories, lives, material and spiritual realities.
— Jonathan Creasey - The Los Angeles Review of Books

She manages to balance the most cerebral passages with a sharp eye for just the right detail...Howe is not for casual readers, but serious ones will be amply rewarded.
— Publishers Weekly

For fans of Howe's poetry and readers fascinated by artistic process.
— Kirkus Reviews

Howe's words give the impression of echoing another, hidden poetry of which we catch only fragments, like an opera sung in another room—except that the other room is death, or history, or the ineffable.
— Geoffrey O'Brien - The Village Voice

The end result is something of a photographic negative: history refreshed and personalized by virtue of its own estrangement.
— Dustin Illingworth - 3:AM

Monomania has its rewards—an incantatory power that shines through. Howe's images, being historical as well as biographical, have the eerie shading of ghosts half-believed in, giving a surreal, dreamlike atmosphere reminiscent of Borges at his sharpest.
— Kirkus Reviews

An important voice in contemporary literature, a signal inheritor of an American poetic tradition. Like Dickinson, her Massachusetts muse, Howe turns the English of a self steeped in books such that every word, as in Scripture, glows with an almost moral quality.
— Artforum

As a poet and a critic she articulates precisely those soundings of uncertainty, those zones of failed or impaired utterance that constitute the literary history of America's uneasy commerce with the word.
— Richard Sieburth - The Times Literary Supplement

Susan Howe is a kind of poststructuralist visionary.
— Bruce Campbell