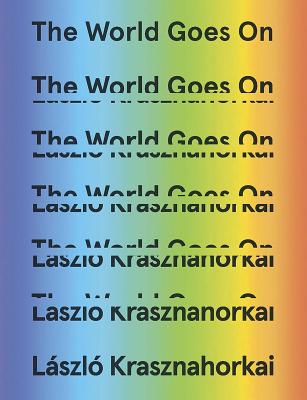 The World Goes On

In The World Goes On, a narrator first speaks directly, then tells eleven unforgettable stories, and then bids farewell (“for here I would leave this earth and these stars, because I would take nothing with me”). As László Krasznahoraki himself explains: “Each text is about drawing our attention away from this world, speeding our body toward annihilation, and immersing ourselves in a current of thought or a narrative…” A Hungarian interpreter obsessed with waterfalls, at the edge of the abyss in his own mind, wanders the chaotic streets of Shanghai. A traveler, reeling from the sights and sounds of Varanasi, encounters a giant of a man on the banks of the Ganges ranting on the nature of a single drop of water. A child laborer in a Portuguese marble quarry wanders off from work one day into a surreal realm utterly alien from his daily toils. The World Goes On is another amazing masterpiece by the winner of the 2015 Man Booker International Prize. “The excitement of his writing,” Adam Thirwell proclaimed in the New York Review of Books, “is that he has come up with this own original forms—there is nothing else like it in contemporary literature.”


Praise For The World Goes On…

The spirit of James Joyce hovers over
Krasznahorkai's pages, and Nietzsche is never far away, either; indeed,
the German philosopher appears early on, breaking down into madness on
witnessing a horse being whipped in a Turinese street. In
philosophically charged prose, Krasznahorkai questions language,
history, and what we take to be facts, all the while rocketing from one
corner of the world to the next, from Budapest to Varanasi to Okinawa..
— Kirkus

Russian cosmonauts, a waterfall-obsessed interpreter in Shanghai teetering on the edge of sanity, and a Portuguese child laborer who escapes his toils by wandering into an alternate reality ...The World Goes On [is] a philosophically-charged new collection of stories about characters that are being pushed (figuratively or literally) to the edges of the world.


A vision of painstaking beauty.

Laszlo Krasznahorkai does many fascinating things with his prose, and one of the most striking is [this]: Starting a sentence hopefully, trying to say this or that, and then traveling inexorably, one clause after another, to the bleak and totalizing conclusion that all is lost, nothing is real, the world is intolerable. Like Beckett, it’s much funnier than you’d think.
— Nitsuh Abebe

Krasznahorkai constantly pushes beyond the expected, escalating everything to the brink of deliriousness.
— Idra Novey

This book breaks all conventions and tests the very limits of language, resulting in a transcendent, astounding experience.

"The World Goes On doesn’t comfort you, but it does reward readerly cathexis with big, gorgeous gestures."


One begins a Krasznahorkai story like a free diver, with a deep inhalation before plunging in. His fiction is not faithful to literary convention, but it is faithful to life. The extended periods of quiescence, the isolated glimpses of the sublime, the portentous images signifying nothing, the mundane images signifying everything, the arbitrary eruptions of horror and beauty—though Krasznahorkai’s technique relies upon artifice, the result is an honest, courageous, often harrowing portrait of a
— Nathaniel Rich

Krasznahorkai offers us stories that are relentlessly generative and defiantly irresolvable - haunting, pleasantly weird, and ultimately bigger than the worlds they inhabit.
— Jacob Silverman

A work that shows, undiminished, the complexity of existence...
— Briefly Noted

His work tends to get passed around like rare currency. One of the most profoundly unsettling experiences I have had as a reader.
— James Wood

The stories in The World Goes On are the reading equivalent of climbing a volcano instead of sitting by the beach on your honeymoon. But the rewards — the sudden, knife-like insights so cerebral they seem the work of an alien intelligence — are worth the effort.
— Adam Morgan

Our current condition of displacement, says László Krasznahorkai in The World Goes On (New Directions), cannot be told; only with great difficulty can language be budged out of endless spirallings of frustration. But then the collection goes on to offer stories of journeys that, whether undertaken or thwarted, arrive at transcendence. At the end there is only one way to go, in what has to be the most powerful page written so far this century.

One of the most mysterious artists now at work.
— Colm Tóibín

I love Krasznahorkai's books. His long, meandering sentences enchant me, and even if his universe appears gloomy, we always experience that transcendence which to Nietzsche represented metaphysical consolation.
— Imre Kertész

László Krasznahorkai is a visionary writer of extraordinary intensity and vocal range who captures the texture of present-day existence in scenes that are terrifying, strange, appallingly comic, and often shatteringly beautiful.
— Marina Warner, (announcing the Man Booker International Prize)

Krasznahorkai is the kind of writer who at least once on every page finds a perfect way of expressing something one has always sensed but never known, let alone been able to describe.
— Nicole Krauss

The Hungarian master of the apocalypse.
— Susan Sontag

The universality of Krasznahorkai’s vision rivals that of Gogol’s Dead Souls and far surpasses all the lesser concerns of contemporary writing.
— W. G. Sebald

A celebration of tiny moments of odd, inexplicable joy.

Thought-provoking and meditative...From Russian cosmonauts to despairing bishops to beleaguered bankers, the threads of forsaking and being forsaken weave like a nervous system through dense, philosophical prose.
— Lauren Hubbard

Krasznahorkai's fiction is apocalyptic in the original sense: concerned with the time when ordinary, blinkered perception gives way to revelation, when the veil is rent and we see things in their true and terrifying form. The World Goes On, a collection of 20 short stories plus a coda, serves as a wonderful primer to the 'invisible gigasystem' that is the Krasznahorkai universe.
— Anthony Domestico

George Szirtes (b. 1948) is an award-winning poet and translator who settled in England after his family fled the Hungarian Uprising of 1956.

John Batki is a kilimologist, writer, translator, and visual artist. He was born in Hungary and has lived in the United States since age fourteen.
Loading...
or support indie stores by buying on