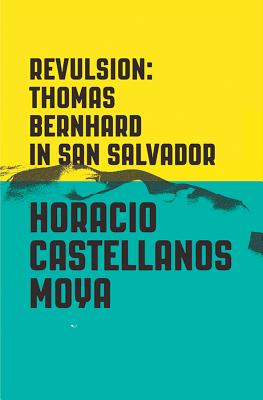 The 1997 novel that put Horacio Castellanos Moya on the map, now published for the first time in English

An expatriate professor, Vega, returns from exile in Canada to El Salvador for his mother’s funeral. A sensitive idealist and an aggrieved motor mouth, he sits at a bar with the author, Castellanos Moya, from five to seven in the evening, telling his tale and ranting against everything his country has to offer. Written in a single paragraph and alive with a fury as astringent as the wrath of Thomas Bernhard, Revulsion was first published in 1997 and earned its author death threats. Roberto Bolano called Revulsion Castellanos Moya’s darkest book and perhaps his best: “A parody of certain works by Bernhard and the kind of book that makes you laugh out loud.”

The novelist Horacio Castellanos Moya, an exile from El Salvador, seems permanently transfixed by arbitrary terror. His novels, five of which have been translated into English, chart the lives of those thrown into what Roberto Bolaño called Latin America’s “Secret Vietnam.” As in the purest of Greek tragedies (Moya calls Sophocles one of his favorite writers), his slim, exacting books operate according to the shifting logic of distant, mysterious forces. The Olympian gods were the original aimless authority; the various players in Latin America’s civil wars, with their capricious interests, capacity for violence, and callous indifference to suffering, are the gods’ modern incarnations.
— Michael LaPointe - Los Angeles Review of Books

Castellanos Moya has turned anxiety into an art form and an act of rebellion, and redeemed paranoia as a positive indicator of rot.
— Natasha Wimmer - The Nation

Acid humor, like a Buster Keaton movie or a time bomb.
— Roberto Bolaño

An intense writer, whose short novels take fierce satiric hold of a fictional concept and squeeze and squeeze.
— James Wood - The New Yorker

A welcome eye-opening addition to this new literature of the Latin American nightmare.
— Anderson Tepper - Time Out New York

Even nineteen years on, the book’s atmosphere of exasperated rage feels itchy, jagged, and real.
— The Paris Review

From a political perspective, Revulsion has a lot to teach us… It may be a gift, and it is very comforting, but lonely anger won’t help you in the end.
— The New Inquiry

Operating as both a parody and a darkly funny, explosive rant of a man who detests his homeland, it’s a blistering novella that satisfies the darkness clouding the cynical side of our souls.
— Numéro Cinq

Through imitation, a hybrid gem of fiction is born.
— Mark Haber - LitHub

A tribute and a parody as well as an original voice.
— Bookforum

Best read in a single sitting to indulge the ranting invective in all of its uninterrupted and visceral glory, Revulsion is, at once, literary homage, political/cultural harangue, exemplification of storytelling's inherent power, and a damn fine, entertaining novel. Castellanos Moya's fiction, never ever well-suited for those in need of enlivening, hums with frenetic energy; a foreboding din both jarring and ruthless.

A scathing, electric, brief novel, an unrelenting diatribe taking aim at everything… Castellanos Moya masterfully lays out the entrails of a country gutted by corruption and war.
— Booklist

Moya brings his readers to the center, dares them to reconcile the narrative rant before their eyes with the author’s cheeky assertion that this rant is the one approved for a more general, more delicate audience... Moya is as whip smart as any of them, and as pissed off; and the reader would do well to read carefully, lest they feel the lash of his well-earned condescension.
— Full-Stop

Lee Klein’s fiction, essays, reviews, and translations have appeared in various publications. His novel The Shimmering Go-Between was published in 2014 by Atticus Books.
Loading...
or
Not Currently Available for Direct Purchase