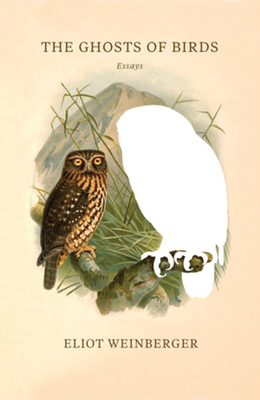 The Ghosts of Birds

The Ghosts of Birds offers thirty-five essays by Eliot Weinberger: the first section of the book continues his linked serial-essay, An Elemental Thing, which pulls the reader into “a vortex for the entire universe” (Boston Review). Here, Weinberger chronicles a nineteenth-century journey down the Colorado River, records the dreams of people named Chang, and shares other factually verifiable discoveries that seem too fabulous to possibly be true. The second section collects Weinberger’s essays on a wide range of subjects—some of which have been published in Harper’s, New York Review of Books, and London Review of Books—including his notorious review of George W. Bush’s memoir Decision Points and writings about Mongolian art and poetry, different versions of the Buddha, American Indophilia (“There is a line, however jagged, from pseudo-Hinduism to Malcolm X”), Béla Balázs, Herbert Read, and Charles Reznikoff. This collection proves once again that Weinberger is “one of the bravest and sharpest minds in the United States” (Javier Marías).


Praise For The Ghosts of Birds…

Eliot Weinberger — in his original essays no less than in his work as a
translator, editor, and critic — is a masterful curator. He is a
restorer, an arranger, a presenter
— Justin Taylor

A new book of essays proves to be as erudite, compelling, and delightfully strange as we have come to expect from Eliot Weinberger.
— Brendan Driscoll

These exhaustively researched pieces are richly detailed and unfailingly interesting...dazzles as a repository of knowledge and interpretation.
— The Ghosts of Birds

Over time, Weinberger has become known for his unclassifiable prose, a mode in the twilight between prose poetry, amateur philological essay, and literary criticism.
— David S. Wallace

In The Ghost of Birds, part of which is a continuation of the serial essay begun in An Elemental Thing,
Eliot Weinberger further establishes himself as one of our singular and
singularly great essayists. A modernist with the horror and absurdity
of the 20th century behind him, Weinberger’s collection—which moves from
medieval Irish legends to contemporary politics and poetry—is tinged
humor and grace, fully alive to the weirdness of the world.
— Stephen Spark

Combining scholarly authority with a moral allegiance to the arcane, the translator and editor Weinberger creates genre-bending essays and prose poems to help us see the world anew. This eclectic collection spans centuries and cultures and might make you wonder if there is anything its author doesn’t know.
— Daphne Kalotay

My favorite essayist is Eliot Weinberger. His remarkable breadth of calm concern is impressive.
— Gary Snyder

His essays use lists, collages of information, and sometimes, as poetry does, varying line breaks. They don’t read like anyone else’s work.
— Christopher Byrd

A master of the infinite commentary on the astonishing variety of the world … I envy those who have not yet discovered him.
— Enrique Vila-Matas

One remains in silent amazement: How does he find these stories? How does he know everything?

As is often the case with brilliant writers, an Eliot Weinberger sentence cannot be mistaken for that of anyone else.
— Will Heyward

The brilliant net of details that Weinberger casts and recasts in his various inventive approaches to form is precisely what constitutes a superlative poetic imagination. And it’s what holds the essays—and us—trembling and raging and hallucinating together.
— Forrest Gander

Our personal favorite for the Nobel Prize.

Eliot Weinberger is an essayist, editor, and translator. He lives in New York City.
Loading...
or support indie stores by buying on
(This book is on backorder)