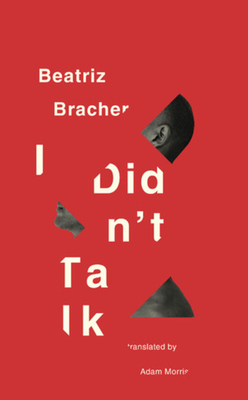 The English-language debut of a master stylist: a compassionate but relentless novel about the long, dark harvest of Brazil’s totalitarian rule

A professor prepares to retire—Gustavo is set to move from Sao Paulo to the countryside, but it isn’t the urban violence he’s fleeing: what he fears most is the violence of his memory. But as he sorts out his papers, the ghosts arrive in full force. He was arrested in 1970 with his brother-in-law Armando: both were vicariously tortured. He was eventually released; Armando was killed. No one is certain that he didn’t turn traitor: I didn’t talk, he tells himself, yet guilt is his lifelong harvest. I Didn’t Talk pits everyone against the protagonist—especially his own brother. The torture never ends, despite his bones having healed and his teeth having been replaced. And to make matters worse, certain details from his shattered memory don’t quite add up... Beatriz Bracher depicts a life where the temperature is lower, there is no music, and much is out of view. I Didn't Talk's pariah’s-eye-view of the forgotten “small” victims powerfully bears witness to their “internal exile.” I didn’t talk, Gustavo tells himself; and as Bracher honors his endless pain, what burns this tour de force so indelibly in the reader’s mind is her intensely controlled voice.


Praise For I Didn't Talk…

I Didn’t Talk is a cheeky and patient book, gently confronting pain without sacrificing wit, a book which merges together a fraught past and an uncertain future.

Pensive novel of political terror and its consequences, set in the shadow of post-junta Brazil....A slender but memorable contribution to the literature of crime and (sometimes self-inflicted) punishment.
— Kirkus

Published in Brazil on the 40th anniversary of the Golpe de 64, I Didn’t Talk can be read as one of many novelistic catalogs of 20th-century atrocities. As with the works of W. G. Sebald and Patrick Modiano, this is a slim, dense novel that lingers in the eddies of personal memory and historical reckoning.

Above all, it's the writing that shines in I Didn't Talk. Bracher, along with translator Morris, handles immensely difficult subjects beautifully, with language that's sometimes spare, sometimes elaborate, but always gorgeous. It's a novel that's intelligent but not showy, and Bracher's restraint makes the story all the more potent. And the story is an important one. I Didn't Talk isn't just about one emotionally bruised man; it's about the lasting effects of violence, and the way cruelty causes its victims to torture themselves.

Extraordinary force and beauty—also a reflection on the construction of memory and the power of the tale.
— O Estado de S. Paulo

Brazil’s Bracher arrives in English with this brilliant, enigmatic rumination...Bracher is a force to be reckoned with and has crafted a haunting, powerful novel.
— Publishers Weekly (starred)

"Brazil’s “ghosts” refuse to stay buried, and they haunt the narrator of Bracher’s novel."
— Lisa Mullenneaux - The Critical Flame

Bracher’s novel examines the way in which stories give shape and meaning to the unknowable, and resists the notion that one definitive version of history can or should impose meaning on the past.
— Tristen Harwood - The Monthly

Bracher’s story abounds with narrative and thematic contradictions and encompasses everything from the gulf between our own self-image and how others perceive us to the flaws that can arise when one attempts to apply literary analysis to a life. The resulting narrative is unpredictable and its dissonances resonate powerfully.
— Tobias Carroll - Words Without Borders

While the central question—did Gustavo give away his brother-in-law?—serves as a locus for the book, it is really an extended meditation on a variety of topics: the (un)reliability of memory, the meaning of education, the way members of families see one another, and the crushing impact of the dictatorship years on generations past and present. Translator Adam Morris deftly renders Bracher’s conversational style, chasing Gustavo as he skips from one topic to another, lost in the haze of memory.
— World Literature Today

Beatriz Bracher, born in Sao Paulo in 1961, grew up under the Brazilian military dictatorship. Her memories of that time intersect with the lives of people whose friends and lovers were tortured, exiled, and killed, as well as with those who did the killing. An editor, screenwriter, and the author of six books of fiction, Bracher has won three of Brazil’s most prestigious literary awards: the Clarice Lispector Prize, the Rio Prize, and the Sao Paulo Prize.

A writer and translator based in California, Adam Morris has translated novels by Hilda Hilst and Joao Gilberto Noll.
Loading...
or support indie stores by buying on
(This book is on backorder)