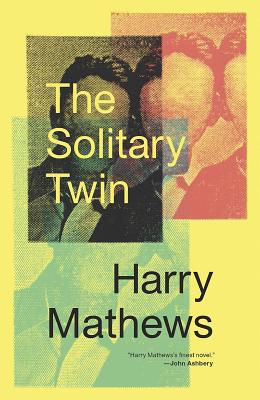 Harry Mathews's brilliant final work, The Solitary Twin, is an engaging mystery that simultaneously considers the art of storytelling. When identical twins arrive at an unnamed fishing port, they become the focus of the residents' attention and gossip. The stories they tell about the young men uncover a dizzying web of connections, revealing passion, sex, and murder. Fates are surprisingly intertwined, and the result is a moving, often hilarious, novel that questions our assumptions about life and literature.

Harry Mathews (1930–2017) was born in New York. A founding editor of the literary journal Locus Solus, he wrote novels, poetry, short fiction, essays, and translations from the French. His many books include Cigarettes (1987), The Sinking of the Odradek Stadium (1999), and The Human Country (2002).

Praise For The Solitary Twin…

The Solitary Twin is the perfect endnote for Harry Mathews and a superb point of entry for new readers, encapsulating his lifelong commitment to formal invention while simply being an excellent novel in its own right.

An imagination and an ingenuity that are often just astonishing.

An imagination and an ingenuity that are often just astonishing.

A fascinating, discursive swan song that celebrates the power of stories.
— Tyler Malone

As the novel circles closer to the grand reveal promised by its title, Mathews toys with the reader’s 'desire to resolve the irresolute, to conclude the incomplete, to have the crooked made straight.' The result is an undeniably clever parting shot from one of contemporary literature’s most playfully challenging writers.

One of the most remarkable prose stylists presently writing in English.

Posthumous books almost always feel half-formed, coincidental, unpublished for a reason....The Solitary Twin, however, may well be the last great surprise Mathews pulled out of his deep bag of tricks. It is funny, perplexing, consistent and unusual, with all the characteristic Mathews obsessions. It may also be one of the best places to start enjoying his work.


Comic extravaganza that plays mockingly with every device of fiction.

Like Roubaud and Perec, Mathews engineers a funhouse labyrinth in which
guise disfigures guise and the logic that reigns is that of representation.

Comic extravaganza that plays mockingly with every device of fiction.