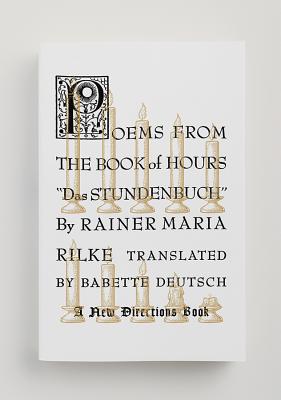 Poems from the Book of Hours (Paperback)

One of the most powerful poetry collections of the twentieth century, now in a beautiful new edition

Although The Book of Hours is the work of Rilke’s youth, it contains the germ of his mature convictions. Written as spontaneously received prayers, these poems celebrate a God who is not the Creator of the Universe but rather humanity itself and, above all, that most intensely conscious part of humanity, the artist. Babette Deutsch’s classic translations—born from “the pure desire to sing what the poet sang” (Ursula K. Le Guin)—capture the rich harmony and suggestive imagery of the originals, transporting the reader to new heights of inspiration and musicality.

RAINER MARIA RILKE (1875–1926) is one of the greatest poets who ever wrote in the German language. His most famous works are Sonnets to Orpheus, The Duino Elegies, Letters to a Young Poet, The Notebooks of Malte Laurids Brigge, and The Book of Hours.

Praise For Poems from the Book of Hours…

If Rilke cut himself shaving, he would bleed poetry.
— Stephen Spender

Poets in English continue to line up for the inevitable failure of translating
Rilke’s short lyrics. The best translations I have seen are from Babette
Deutsch.
— Clive James