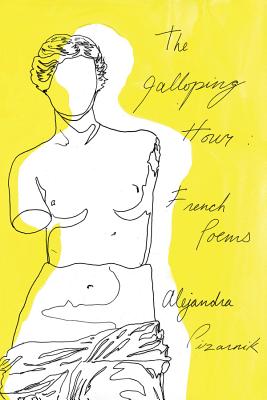 The Galloping Hour: French Poems—never before rendered in English and unpublished during her lifetime—gathers for the first time all the poems that Alejandra Pizarnik (revered by Octavio Paz and Roberto Bolano) wrote in French. Conceived during her Paris sojourn (1960–1964) and in Buenos Aires (1970–1971) near the end of her tragically short life, these poems explore many of Pizarnik’s deepest obsessions: the limitation of language, silence, the body, night, sex, and the nature of intimacy.

Drawing from personal life experiences and echoing readings of some of her beloved/accursed French authors—Charles Baudelaire, Germain Nouveau, Arthur Rimbaud, and Antonin Artaud—this collection includes prose poems that Pizarnik would later translate into Spanish. Pizarnik’s work led Raúl Zurita to note: “Her poetry—with a clarity that becomes piercing—illuminates the abysses of emotional sensitivity, desire, and absence. It presses against our lives and touches the most exposed, fragile, and numb parts of humanity.”

To bear down on Pizarnik’s scant lines is to find their essential rigor: nothing
is brittle, nothing breaks.
— Joshua Cohen - Harper's

It is a privilege to read.
— Zack Anderson - Kenyon Review

As this slender new collection demonstrates, Pizarnik’s commitment to poetry started early and consumed her life. Whether in Spanish or in French, in Buenos Aires or in Paris, her voice remains that of the eternal émigré who searched for a home but failed to find it. Pizarnik wrote the way she lived: in a state of restless longing.
— Nathan Scott McNamara - Poetry Foundation

The late Argentine writer Pizarnik kindles a wildfire of rapturous desire amid a twilight landscape of irrecoverable love in these poems that were unpublished during her brief life....lustful, paralyzing, and contagious.
— Publishers Weekly (starred)

To read Pizarnik is to inhabit her melancholic world, a world of recursive, enabling lines, where 'my language is the priestess.'
— Nick Ripatrazone - The Millions

Each of Pizarnik’s poems is the hub of an enormous wheel.
— Julio Cortázar

Patricio Ferrari is a professor at Rutgers University and has translated and edited works by Fernando Pessoa and Alejandra Pizarnik.

FORREST GANDER lives in northern California and has published books of poems, translations, and essays. He has won numerous awards, including the Pulitzer Prize for Be With, and the Best Translated Book Award, as well as fellowships from the Library of Congress, the Guggenheim Foundation, and United States Artists.