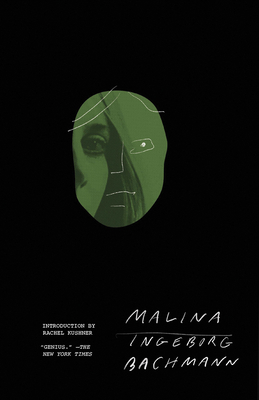 Now a New Directions book, the legendary novel that is “equal to the best of Virginia Woolf and Samuel Beckett” (New York Times Book Review)

In Malina, originally published in German in 1971, Ingeborg Bachmann invites the reader into a world stretched to the very limits of language. An unnamed narrator, a writer in Vienna, is torn between two men: viewed, through the tilting prism of obsession, she travels further into her own madness, anxiety, and genius. Malina explores love, "deathstyles," the roots of fascism, and passion.

Bachmann's only novel—set in Vienna and first published in 1971—takes on the vexed struggle between the sexes in a decaying city. Dense, compelling, often weirdly funny, a dark fairy tale told as a murder mystery. Rewarding and highly recommended.
— Kirkus (starred)

A variation on the detective novel: Malina’s first-person narrator proceeds from the 'universal prostitution' of Vienna to the proximate causes of her destruction.

It seems in Malina there is nothing Bachmann cannot do with words.

In place of Wittgenstein’s language as city, Malina creates a vision of Vienna as language, one might even say as mind: to what extent it may be feminine, masculine, or otherwise is impossible to discern.

A psychological thriller of a tormented, existential sort. And it’s a love triangle, though a triangle most accurately drawn with dotted lines, given that it’s debatable how many of its members are real....This revised translation appears at a time when the book feels quite contemporary. Though even innovative mainstream fiction now being published reads like “A Is for Apple” compared to Malina, there’s no question that the book shares a spirit with any and all books about the unsought psychological challenges of being a woman in this world. Lucid and powerful.

Bachmann’s vision is so original that the effect is like having a new letter of the alphabet.
— The Guardian

In the astonishing desolation and wonder that is Ingeborg Bachmann’s Malina... there is no certain narrative, but there are many, deeply internalised, stories.

Although Bachmann imbibed the despondent charm of her forebears, her only finished novel reaches the contemporary reader as something strange and sui generis: an existential portrait, a work of desperate obsession, a proto-feminist classic, and one of the most jagged renderings of female consciousness European literature has produced. In its torrent of language, paralyzing lassitude, and relentless constriction of expectation and escape, Malina condenses—and then detonates—the neurasthenic legacy of the interwar Austrian novel.

An existential portrait, a work of desperate obsession, a proto-feminist classic, and one of the most jagged renderings of female consciousness European literature has produced.
— Dustin Illingworth - The Nation

It seems in Malina there is nothing Bachmann cannot do with words.

— The New York Review of Books

A feminist classic.
— The Paris Review

If I was permitted to keep one book only it would be Malina. Malina has everything.

The most intelligent and important woman writer our land has produced this
century.
— Thomas Bernhard

A Viennese woman cooks dinner for her lover, waits by the telephone, delays
embarking on a trip or writing the book she’s meant to write. And in that null-time,
the abyss of twentieth-century trauma yawns wide open and engulfs
her.
— Tom McCarthy

(1926–1973) is widely regarded as one of the greatest German-language writers of the twentieth century. Her poems, plays, stories, and only finished novel, Malina, have been championed by Paul Celan, Hannah Arendt, Günter Grass, Peter Handke, Thomas Bernhard, Christa Wolf, and Elfriede Jelinek.

Philip Boehm is an American playwright, theater director, and the translator of numerous books, including Ingeborg Bachmann's Malina (forthcoming from New Directions).

Rachel Kushner is the bestselling author of The Flamethrowers, Telex from Cuba, and The Mars Room.
Loading...
or support indie stores by buying on