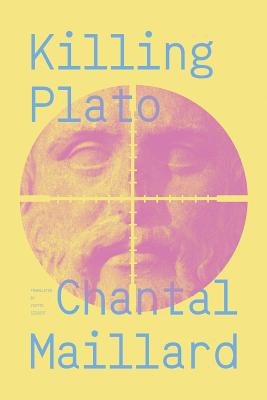 “I write / / to make the poisoned water / fit to drink.” —Chantal Maillard

Longlisted for the PEN Poetry in Translation Award


The two sequences of this book form a braided ars poetica: “Killing Plato” and “Writing.” The first is a numbered sequence of twenty-eight poems organized around an accident: a pedestrian has been hit by a truck and is dying in the middle of the road. Various characters appear—the philosopher Michel Serres, Robert Musil, a woman smoothing out her stocking, the truck driver, a boy on a balcony, the Spanish poet Jesús Aguado. At the bottom of the page another tale unfolds: a woman bumps into an old friend, a male poet who has written a book called Killing Plato about “a woman who has been knocked over by the force of a sound.” “Writing,” the second part, unfolds as a lyrical meditation on mortality and literary production.

Chantal Maillard is a poet, translator (of Henri Michaux, in particular), and essayist (of books on India, Belgium, Chinese philosophy, the aesthetics of María Zambrano, and the slime of the snail). Born in Brussels in 1951, Maillard moved with her family to Spain as a child, and has won both the Premio Nacional de Poesía (for Killing Plato) and the Premio Nacional de la Crítica.

The poet Yvette Siegert has also translated The Reef by Juan Villoro and Alejandra Pizarnik’s poetry collections A Musical Hell, Diana’s Tree, and Extracting the Stone of Madness, for which she won the 2017 Best Translated Book Award.
Loading...
or support indie stores by buying on