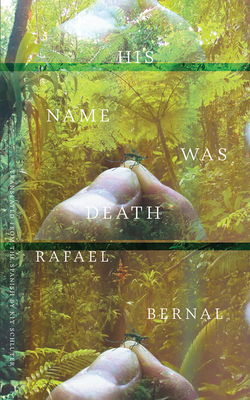 His Name was Death

Never before in English, this legendary precursor to eco-fiction turns the coming insect apocalypse on its head


A bitter drunk forsakes civilization and takes to the Mexican jungle, trapping animals, selling their pelts to buy liquor for colossal benders, and slowly rotting away in his fetid hut. His neighbors, a clan of the Lacodón tribe of Chiapas, however, see something more in him than he does himself (dubbing him Wise Owl): when he falls deathly ill, a shaman named Black Ant saves his life—and, almost by chance, in driving out his fever, she exorcises the demon of alcoholism as well. Slowly recovering, weak in his hammock, our antihero discovers a curious thing about the mosquitoes’ buzzing, “which to human ears seemed so irritating and pointless.” Perhaps, in fact, it constituted a language he might learn—and with the help of a flute and a homemade dictionary—even speak. Slowly, he masters Mosquil, with astonishing consequences… Will he harness the mosquitoes’ global might? And will his new powers enable him to take over the world that’s rejected him? A book far ahead of its time, His Name Was Death looks down the double-barreled shotgun of ecological disaster and colonial exploitation—and cackles a graveyard laugh.


Praise For His Name was Death…

Rafael Bernal's The Mongolian Conspiracy, written in 1969, is a masterful work of hilarity and noir. Compelling and full of wit, this is a detective story with a cast of memorable characters, delicious Mexican profanities and sharp, well-placed dialogue.

This is the first novel by Bernal, who died in 1972 at 57, to be translated into English... at once complex, chilling and slapstick, is a doozy.
— John Williams - New York Times

The pervading sense of personal and social oblivion becomes increasingly bracing. It’s like Apocalypse Now with mosquitos, and surprisingly it works.

In 1947, Bernal published one of Mexico’s pathbreaking sci-fi novels: His Name Was Death. Set among the Lacandón indigenous people in the country’s southern rainforests, it depicts a universe ruled by hyper-intelligent mosquitoes who farm the human race as a food source...Bernal’s work can be pulpy, and reactionary, but it’s also clever in the way it encourages critical reading. He possessed a rare ability to assume a perspective and examine it at the same time—and he expected his readers to do the same.

The apparent simplicity of His Name Was Death belies the subtlety of its themes. Behind the horror of the mosquito “invasion” are the nested invasions of the apparently “civilized” humans in the book.

Rafael Bernal (1915-1972) was a Mexican diplomat and novelist, best known for his crime novels, including The Mongolian Conspiracy (New Directions).

The poet (Pierrot's Fingernails), translator, and book designer Kit Schluter (born in Boston in 1989) lives in Mexico City.  His acclaimed translations from the French, Occitan, and Spanish include books by Olivia Tapiero, Anne Kawala, Jaime Saenz, Michel Surya and Marcel Schwob.
Loading...
or support indie stores by buying on