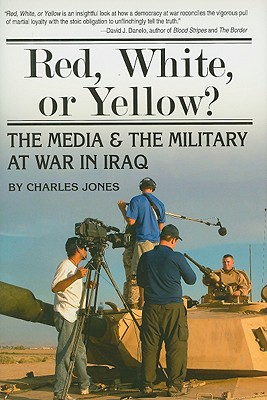 The Media and the Military at War in Iraq

War has always attracted journalists, such as Ernest Hemingway in the Spanish Civil War or David Halberstam in Vietnam. And war reporting has often been controversial as well as influential, like William Randolph Hearst's "yellow journalism" in the Spanish-American War. But what happens when 24/7 news channels and the Internet make news instantaneous . . . when the public's attention span decreases . . . when political and military leaders employ slick spinmeisters to package the news . . . when reporters lose their objectivity?

In this passionate look at how war is reported in the age of Fox News and blogging, Charles Jones takes readers from the front page to the front lines--and back again--to explore how the Iraq War has been covered. Along the way he interviews journalists and military leaders--including Jim Lehrer of PBS, Jamie McIntyre of CNN, Rick Atkinson of the Washington Post, Joe Klein of Time, and former Marine Gen. James L. Jones--and describes the conflict between the media, which claims a right to know, and the military, which claims a need for secrecy and security. Jones shows us Geraldo Rivera drawing battle plans in the sand, MSNBC censoring Phil Donahue, and Donald Rumsfeld "oh golly"-ing reporters at the Pentagon and answers these questions:

Why has public interest in news about Iraq declined since 2003?Why do most people seem to care more about Britney Spears and Paris Hilton than about the latest casualties in Iraq? And why do many news outlets indulge those preferences?How does the embedding process work? Has it been successful?How has the military disseminated information about the war?To what extent has the Bush administration twisted the facts?How do reporters balance objectivity and patriotism?What are the obligations of a journalist in wartime?