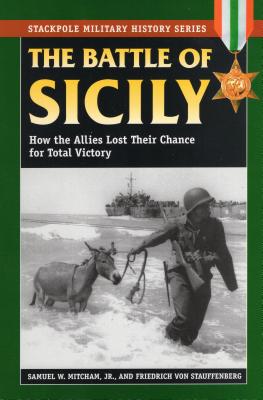 The Battle of Sicily

The campaign for Sicily from the Axis point of viewReassesses the German Army's performanceDetails about German commanders who have been neglected by historiansIn July 1943 the Allies launched a massive amphibious assault on Sicily. The invasion proved successful, bringing fame to American Gen. George S. Patton and British Gen. Bernard Montgomery, whose "race" to Messina was immortalized in the movie Patton. But according to Mitcham and Stauffenberg, the Allies lost a significant opportunity for total victory when the Germans mounted a brilliant defense. With only 4 divisions, the Germans held off the invaders for 38 days and then escaped, almost entirely intact, to mainland Italy, dooming the Allies to a prolonged battle of attrition up the Italian peninsula.

Samuel W. Mitcham, Jr., is the author of more than twenty books on World War II. He lives in Louisiana. Friedrich von Stauffenberg, who died in 1989, was an expert on German-armored warfare in World War II.
Loading...
or
Not Currently Available for Direct Purchase