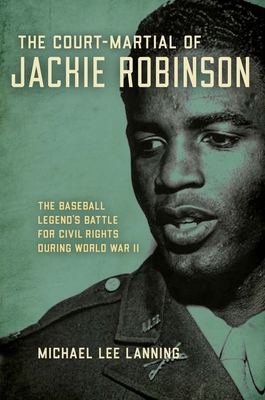 The Court-Martial of Jackie Robinson (Hardcover)

Michael Lee Lanning, who graduated from Texas A&M, served more than twenty years in the U.S. Army, retiring as a lieutenant colonel with the Senior Parachute Badge, Combat Infantryman's Badge, Ranger Tab, and Bronze Star. In Vietnam he commanded an infantry platoon, a recon platoon, and a rifle company. His military career included service as public-affairs officer for Gen. Norman Schwarzkopf and similar work in the Department of Defense Public Affairs office. He has spoken at conferences on the African-American Soldier at the D-Day Museum and Tuskegee University and has appeared on NPR, CBS, and the History Channel. He has written twenty-four nonfiction books on military history, sports, and health, with more than 1.1 million copies of his books in print in fifteen countries and twelve languages. His previous books include the classic Vietnam, 1969-1970: A Company Commander's Journal, which the New York Times called "one of the most honest and horrifying accounts of a combat soldier's life to come out of the Vietnam War." A native of Texas, Lanning lives in Lampasas, Texas, just west of Fort Hood.
or support indie stores by buying on
Copyright © 2020 American Booksellers Association