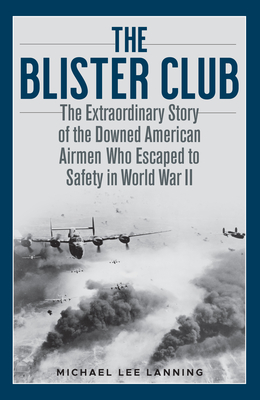 During World War II, some 10,000 American bombers and fighters were shot down over Europe. Of the crews aboard, 26,000 men were killed, while 30,000 survived being shot down only to be captured and made prisoners of war. Against the longest of odds, nearly 3,000 airmen made it to the ground alive, evaded capture, and escaped to safety. These men proudly called themselves the Blister Club. Drawing on tens of thousands of pages of mostly untapped documents in the National Archives, Michael Lee Lanning tells the story of these courageous airmen. They had received escape-and-evasion (E & E) training, and some were lucky enough to land with their E-&-E kits--but all bets were off once they hit the ground. They landed after an air catastrophe. The geography was usually unfamiliar. Civilians might or might not be trustworthy. German soldiers and Gestapo agents hunted down airmen as well as civilians who dared help them. If an airman abandoned his uniform for civilian garb, he forfeited Geneva Convention protections. Most faced the daunting task of escaping on foot across hundreds of miles. The fortunate connected with one of the established escape routes to Spain or Switzerland or across the English Channel, or they hooked up with the underground resistance or friendly civilians. Upon return to friendly lines, these men were often able to provide valuable intelligence about enemy troop dispositions and civilian morale. Many volunteered to fly again even though regulations prohibited it. The Blister Club is history with a punch. With a historian's eye, Lanning covers the hows and whys of escape-and-evasion and aerial combat in the European theater, but the book also vividly captures the stories of the airmen who did the escaping and evading, including that of a young pilot named Chuck Yeager, who, during his own escape, aided the French Resistance and helped another downed airman to safety--and then begged to fly again, eventually securing Eisenhower's approval to return to the air, where he achieved ace status. Stories of escape are popular, especially those set during World War II, as are stories of the war in the air. Combining both of these, The Blister Club should find an enthusiastic audience.

Michael Lee Lanning, a graduate of Texas A&M, served more than twenty years in the U.S. Army, retiring as a lieutenant colonel with the Senior Parachute Badge, Combat Infantryman's Badge, Ranger Tab, and Bronze Star. In Vietnam he commanded an infantry platoon, a recon platoon, and a rifle company. His military career included service as public-affairs officer for Gen. Norman Schwarzkopf and Department of Defense public affairs work. He has appeared on NPR, CBS, and the History Channel and has written twenty-five books, with more than a million copies of his books in print in fifteen countries and twelve languages. His previous books include the classic Vietnam, 1969-1970: A Company Commander's Journal (Ivy Books, 1987; Ballantine, 1988; Texas A&M, 2007), which the New York Times called "one of the most honest and horrifying accounts of a combat soldier's life to come out of the Vietnam War." With Stackpole, he has published Tours of Duty: Vietnam War Stories (2014), reprinted Inside Force Recon: Recon Marines in Vietnam (2017), and written The Court-Martial of Jackie Robinson (Spring 2020). A native of Texas, Lanning lives in Lampasas, Texas, not far west of Fort Hood.
Loading...
or support indie stores by buying on
(This book is on backorder)