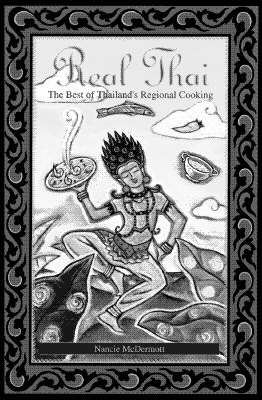 The Best of Thailand's Regional Cooking

Nancie McDermott, widely regarded as the American expert on Thai cooking, offers a clear, straightforward approach to dishes that many Westerners have tasted only in restaurants. In "Real Thai, " she demystifies once and for all every aspect of this flavorful, healthy cuisine. Organized geographically by region, over 100 tempting, easy-to-follow recipes explore not only dishes that may be familiar to Americans, such as Chicken Coconut Soup and Pork Satay, but also lesser-known local specialties such as Crab Cakes with Cilantro Paste, Fish with Yellow Curry Steamed in Banana Leaves, Sticky Rice with Mangoes, and Son-in-Law Eggs. Including advice on basic utensils and techniques, a glossary of ingredients, a list of shopping sources, and a section of suggested menus, this is the definitive guide for novice and expert alike to the diverse flavors of a regional Asian cuisine that is rapidly becoming an international favorite.

Nancie McDermott is a food writer and cooking teacher specializing in the cuisine of Thailand, where she spent three years as a Peace Corps volunteer. Her food articles have appeared in numerous magazines, and she is the author of the perennially popular cookbook, Real Thai.
Loading...
or
Not Currently Available for Direct Purchase