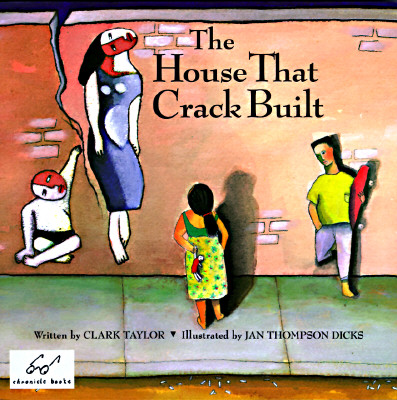 The House That Crack Built (Paperback)

With a beat reminiscent of hip hop or rap music, a well known nursery rhyme is brilliantly transformed into a powerful poem about the tragic problem of illegal drugs and its victims. From the harvesting of the coca plants to dealers and gangs to the innocent crack babies born everyday, cocaine's journey is starkly traced from beginning to end. The rhythmic text, which is realistic but not moralizing, will appeal to teenagers and adults. But it is also accessible for even very young children, making this a valuable resource for parents, teachers, librarians, caregivers, and everyone else who is looking for a way to broach this difficult subject. A list of organizations is provided for those seeking help for a loved one or a way out for themselves. A forword by children's advocate Michael Pritchard teaches us that we are all victims of this debilitating drug but reminds us that we also have the ability to change our world.

Clark Taylor has worked as a bartender, an oil field laborer, and a jail services volunteer but now makes his living as a comedian. Mr. Taylor lives in New York City.

Jan Thompson Dicks is the illustrator of The House That Crack Built, published by Chronicle Books in 1992 to extraordinary critical acclaim. She lives in Albuquerque, New Mexico.

Praise For The House That Crack Built…

--PUBLISHERS WEEKLY, Starred Review, June 1, 1992, Best Books of 1992
A familiar nursery rhyme takes a decidedly dark turn in this sobering picture book. Written in a hip-hop rhythm an based on "The House That Jack Built," the new cumulative rhyme focuses attention on the drug trade and abuse of crack cocaine. No stone is left unturned as the text demonstrates the drug's ripple effect, which begins with exploited South American coca farmers--"These are the Farmers who work in the heat"--and ends up invading urban neighborhoods also infested with gangs, violence, despair and hopelessness: "This is the Street of a town in pain"; "This is the Girl who's killing her brain." Dicks uses muted, somber colors and almost cubist figures and images, to illustrate crack's lethal potential. The picture book format is well-suited to presentation of this subject matter to a wide audience--younger readers can readily digest the sparse text and ask questions about the art, while older children and adults may use the book as a jumping off point for more involved discussion. All of the publisher's proceeds from the book will go to drug education, prevention and rehabilitation programs that specifically help children. All ages.


-- BOOKLIST, April 15, 1992
With a relentless rap beat, this handsome picture book transforms the old, gentle children's rhyme into a dark, cumulative verse about drugs. It connects glamor, violence, and misery across society. "This is the Street of a town in pain / that cries for the Drug known as cocaine." Adding one line at a time, the verse builds up always repeating what's gone before, from the mansion of the crack lord and the guns of the gang to the hungry baby "born of the Girl who's killing her brain / smoking the Crack that numbs the pain." Opposite each verse is a dramatic, richly colored framed painting in a style reminiscent of a vivid street mural. With an element of the surreal, the strung-out addicts are like figures in Picasso's Guernica, their tortured faces twisted horizontally or upside down. The publisher's profits go to drug education and rehabilitation; a short list is provided of organizations to contact for help. But the message spelled out on the book jacket and in the afterword is superfluous. This book will reach kids with its rhythm, its visual power, and its humanity.


--AMERICAN BOOKSELLER, Pick of the Lists, March 1992
This powerful poem about crack cocaine illustrates the complexity of the drug--from the people who grow the plant, to the innocent addicted babies born to mothers who can barely take care of themselves. Accompanying the rap-like text are beautiful yet disturbing pictures, which capture the poems solemn mood. Taylor and Dick's creation will affect middle--and uppergrade students, as well as adults.


--KIRKUS REVIEWS, June 15, 1992
A harrowing takeoff on "The House That Jack Built," this cumulative rhyme takes readers from a large, comfortable house somewhere in Latin America, through the network of cocaine production and distribution, to the "Girl who's killing her brain/Smoking the crack that numbs the pain" and the "Baby with nothing to eat/Born of the girl..." The haunting, rhythmical text is enhanced by stylized, shadowed color illustrations featuring desperate-looking figures roaming an urban landscape, their heads cocked or even upside-down. The message is reinforced with a closing appeal by drug counselor Michael Pritchard, plus information about five national anti-drug organizations. An effective, nonpreachy tool for drug educators at any level.


This book will reach kids with its rhythm, its visual power, and its humanity. Booklist

Best Books for Young Adults ALA