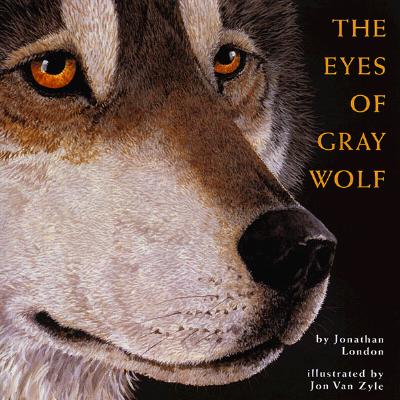 The Eyes of the Gray Wolf (Hardcover)

Listen carefully and you will hear the wild, untamed music of Gray Wolf as he races along icy ridges, howls at the moon, fiercely defends his territory against an unknown pack, and, finally, settles with a new mate. The simple, poetic text follows the restless Gray Wolf as he wanders through the northern winter night and the spectacular illustrations present a dramatic look at a beautiful, endangered animal. A list of organizations is provided at the back of the book for readers moved to learn more and for those who would like to help the endangered wolf. An afterword that adults will want to share with children is also included and offers detailed information on wolves and their range throughout the world.

Jonathan London is the author of more than fifty books for children. He lives in Northern California with his family. Read more about the inspiration behind Jonathan's work.

Praise For The Eyes of the Gray Wolf…

--BOOKLIST, Starred Review, November 1, 1993
On a cold, northern night, the "wild, untamed music" of Gray Wolfs howling can be heard bouncing off the moon. Having recently "lost his mate to a man's steel trap," Gray Wolf is alone and restless as he hunts his snow-covered territory. But when he encounters a wolf pack, a young white wolf steps forth to go with him and be his mate, and he is alone no more. Beginning with the dramatic close-up Gray Wolf looking outward from the dust jacket, noted wildlife artist Van Zyle lures the reader into the wolf's moonlit world in a series of double-page paintings. An effective counterpoint to these powerful images, London's narration is spare and crisply poetic. Together, the two have created a potent vision of a winter interlude as seen through the eyes of Gray Wolf. Imbued with an obvious passion for this majestic endangered animal, the book concludes with a list of organizations working to preserve the wolf and a note from the author appealing for the reader's concern and efforts on behalf of the wolf.


--AMERICAN BOOKSELLER, Pick of the Lists, August 1993
With sparse, poetic text a drama unfolds of Gray Wolf who is wandering alone on a winter's night after losing his mate to a hunter's steel trap. There is suspense as Gray Wolf encounters a wolf pack where many pairs of eyes gleem at him through the darkness. Will he be accepted into the pack? The illustrations by one of Alaska's premier wildlife artists portray the vastness and the beauty of the wolf's domain. The back of the book lists a number of organizations that are working towards protecting the wolf and reintroducing it into native habitats.


--SCHOOL LIBRARY JOURNAL, January 1994
In poetic prose as spare as the Northern setting it portrays, a crucial moment in the life of a wolf who has lost his mate to man is described. Gray Wolf hunts on a moonlit winter night until suddenly his senses alert him to the presence of a strange pack. White Wolf steps out, the two animals meet, circling each other, leaving together, and eventually become the leaders of a new pack. The strength of this story is in its art. The moon is a powerful presence, washing over the snow, lighting the wolves' eyes with intensity, highlighting their bristling fur, offering shadows of the pack that never steps into its light. Van Zyle's brushstrokes are rich with texture, drawing readers into the environment and the story. A map sponging the animal's past and present ranges, an extensive list of conservation organizations, and an excellent author's note that briefly discusses history, behavior, and endangered status contribute to the authority of the book. Superior art and minimalist text offer a more accessible and gripping glimpse of the wolf than that found in Jim Murphy's The Call of the Wolves (Scholastic, 1989).


--PUBLISHERS WEEKLY, August 16, 1993
Gray Wolf, bereft of his mate, hunts alone in the snow-bright night, unknowingly infringing on another pack's territory. "His eyes burn like steady flames. The leader of the pack stares back. Their eyes lock. The moon burns a hole in the night." Returning to the ambience of The Owl Who Became the Moon, London recreates this single moment--frozen in time, saturated with tension and possibility. And the power of this moment generates a story. Words pour out, as fierce as the arctic cold or as luminous as the yellow moon (a wolf "floats over the snow...flowing like water"), evoking genuine feeling without humanizing animals, and portraying nature without being teacherly. In his full-spread watercolors, Van Zyle--an Iditarod racer who keeps a team of Siberian huskies (close descendants of the wolf)--depicts the arctic night and its wolves with uncommon intimacy and ease. Ages 3-8.


A valuable adition for libraries of any size. School Library Journal

This book will catch the attention of children. The Bulletin of the Center for Children's Books