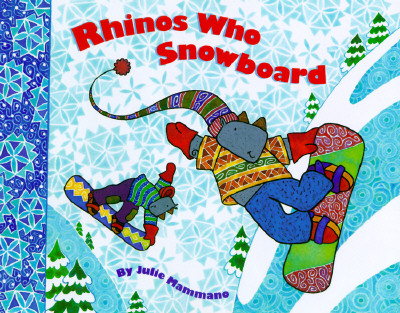 Summer is over and our rhino friends have hung up their surfboards, grabbed their snowboards, and taken to the slopes. colorful watercolors from Julie Mammano capture an epic day of snowboarding for these totally aggro rhinos. They catch air, take insane gaps and charge the steeps until it's time to head home and chill in the cabin, dreaming of their next ride. Snowboarders and those who dream of boarding will love these adorably extreme rhinos and a glossary of snowboarding speak is included to boost anyone's boarding know-how.

Julie Mammano is a freelance artist and illustrator who lives and works in Southern California. In preparation for her books, Julie has learned to surf, snowboard, skateboard and most recently, how to play soccer.

Praise For Rhinos Who Snowboard…

Those awesome rhinos who tore up the waves in Rhinos Who Surf are hitting the slopes -- and snowboarding has never been so much fun!
or
Not Currently Available for Direct Purchase
Copyright © 2020 American Booksellers Association