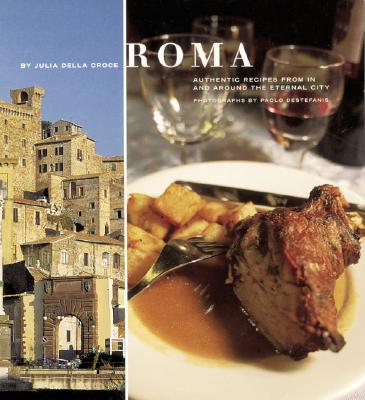 Authentic Recipes from In and Around the Eternal City

The culinary journey that began with Umbria and Veneto, has arrived in the eternal city of Rome and its surrounding region of Latium. In Roma, Julia della Croce ventures from coast to countryside to reveal over 60 cherished recipes passed from generation to generation in this region rich with culinary tradition. While the area surrounding Rome exhibits both the traditions of the Greeks and the culinary refinements of the Etruscans, each of the five Roman provinces has maintained its own culture and culinary character. From the fresh seafood in the coastal province of Latina; to the rustic aged meats and sturdy cooking of the most northerly province of Rieti; to the simple, seasonal dishes of Viterbo known for its aromatic olive oils; to the handmade pastas and rich, savory meat sauces of the landlocked Frosinone province; and finally to the lusty cooking of Rome itself, this collection beautifully captures the authentic tastes of this region's legendary food. Della Croce also lists her favorite places to stay, fun and historical local festivals, and where to find authentic regional Italian cooking and wine classes for those planning a Roman adventure.


Praise For Roma: Authentic Recipes from In and Around the Eternal City…

Julia della Croce's "Roma: Authentic Recipes From In and Around the Eternal City" (Chronicle Books, $19.95), is a paperbound book with terrific photos by Paolo Destefanis. Della Croce, who is the award-winning author of 10 previous cookbooks, including "The Classic Italian Cookbook" (1996), reminds us that Italians say Rome has no cuisine of its own, but she asserts that that's not true. She points to Romans' bold use of pepper and other spices, their fondness for lard and other pork fat, along with olive oil, fennel, mint, cilantro and bitter chocolate (especially in stews and sweet-and-sour dishes).

In any case, it's a little hard to focus on the quite-thorough explanations of ingredients such as pecorino and puntarella when a flip through the pages makes you want to pick up a pan.

Della Croce's book is not as exhaustive as Dunaway's, but there's no shortage of wonderful dishes. Those I've tried have turned out so well, they've instantly joined my repertoire. "Jump-in-the-mouth" saut ed veal cutlets (Saltimbocca alla romana) sound like a silly escapee from a 1970s menu, but these simple little rolls of veal layered with prosciutto and fresh sage are irresistible. The instructions are a little goofy, though, insisting that you cut the meats into 2- by 4-inch rectangles, discarding any scraps. I did so, but I don't discard veal or prosciutto, so I just made raggedly little rolls with the extras, and they were just as delicious. The recipe also forgets to say to roll them up before securing with toothpicks. Sometimes a picture is worth a thousand words.

For baby peas coddled in lettuce (Piselli alla lattuga), Della Croce calls for either fresh English peas or frozen baby peas. How good could it possibly be with frozen peas? Really good, it turns out. You line the pot with lettuce leaves, which impart a hint of flavor, and add finely chopped scallions and fresh mint leaves. I still don't understand why it's so good.

Another contorno (side dish), roasted onions with vinegar dressing (Cipolle al forno), is as simple as can be, with about five minutes of active preparation. But they're so meltingly delicious and beautiful that I've not only made them thrice, but I've also given the recipe to my mother, who loved it so much that she gave it to a friend and my brother. With that kind of exponential recipe blabbing, it's only a matter of time before they land on your table. -Los Angeles Times

Julia della Croce has been distinguished as one of America's best cooking teachers by the James Beard Foundation. Her writing on authentic Italian cooking has appeared in publications such as the Los Angeles Times, Washington Post, Cook's Illustrated, and

Paolo Destafanis is a photographer specializing in travel and food. His work has been featured in magazines including Saveur, Gourmet, Food & Wine, Cucina Italiana, and Wine Spectator. He lives and works in a 13th-century tower in Tuscany.
Loading...
or
Not Currently Available for Direct Purchase