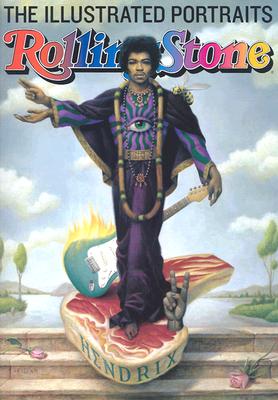 For the first time ever, Rolling Stone has collected the best paintings, caricatures, and drawings ever to grace their pages. Award-winning art director Fred Woodward has created a mesmerizing compendium that serves as a who's who of the illustration world, matching the talents of Ralph Steadman, Milton Glaser, and Philip Burke with famous faces like those of Patty Hearst, Bob Dylan, and Kurt Cobain. Snippets of interviews with both the subjects and the artists illuminate the subjective and interpretive process of illustration. ("I've tried to control my image, but my flesh keeps failing to cooperate," says Pete Townshend.) Featuring over 100 boldly colored illustrations, Rolling Stone: The Illustrated Portraits not only captures the gamut of personalities and figures who have shaped the last quarter of the century but does so with the originality and style that is quintessentially Rolling Stone.

Fred Woodward is art director at Rolling Stone. He has earned Rolling Stone more design awards than any other magazine in the United States, including most recently the National Magazine Awards' General Excellence Prize. Woodward, who holds the distinction as being the youngest-ever inductee into the Art Directors Hall of Fame, is currently the chairman of the prestigious annual American Illustration.
or
Not Currently Available for Direct Purchase
Copyright © 2020 American Booksellers Association