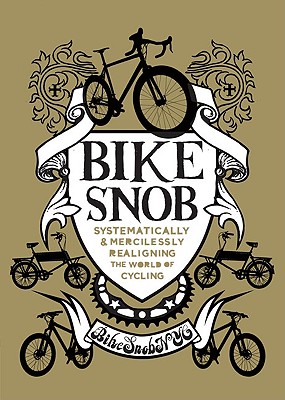 Cycling is exploding in a good way. Urbanites everywhere, from ironic hipsters to earth-conscious commuters, are taking to the bike like aquatic mammals to water. BikeSnobNYC cycling's most prolific, well-known, hilarious, and anonymous blogger brings a fresh and humorous perspective to the most important vehicle to hit personal transportation since the horse. Bike Snob treats readers to a laugh-out-loud rant and rave about the world of bikes and their riders, and offers a unique look at the ins and outs of cycling, from its history and hallmarks to its wide range of bizarre practitioners. Throughout, the author lampoons the missteps, pretensions, and absurdities of bike culture while maintaining a contagious enthusiasm for cycling itself. Bike Snob is an essential volume for anyone who knows, is, or wants to become a cyclist.

ELDEN "FATTY" NELSON, FATCYCLIST.COM
First you'll think the Snob is funny. Then you'll think he s smart. Eventually you'll probably think that he s seen far too many movies for his own good. At some point during this book, however, you re going to say to yourself: Holy crap. He is right. Believe me, that is one disconcerting moment.

BILL STRICKLAND, EDITOR-AT-LARGE OF BICYCLING
Bike Snob should be lovingly gifted to all new cyclers - and forcefully smacked against the heads of all the jaded know-it-alls who take the sport way too seriously.

ROBERT LANHAM, AUTHOR OF THE HIPSTER HANDBOOK
As any avid biker will attest, cycling isn't just a form of transportation. It's a complicated culture with its own slang, taxonomy, and preferred tat styles. If you haven't read Bike Snob, you should consider reattaching those training wheels to your overpriced fixie.

CHRISTIAN LANDER, AUTHOR OF STUFF WHITE PEOPLE LIKE
After reading Bike Snob I put a brake on my fixie, started wearing a helmet, then punched myself in the stomach for spending so much time as a stupid hipster. This is a social manual that should be bundled with every bike shipped in America.

LANCE ARMSTRONG
I like to think I know a thing or two (or three) about being ruthless and relentless - either trying to win the Tour or fighting cancer. The Snob knows it too. Keeping us dorks in line is tough work. I take pleasure in getting picked on by the Snob, slightly more pleasure in reading his writing, but take the most pleasure punishing his ass (my payback) on the bike either in Central Park or on 9W/River Road. Long live the Snob.

BikeSnobNYC is a frequent racer, daily commuter, and former bike messenger himself. He has been published and profiled in numerous publications, including the New York Times, Outside, and Bicycling Magazine.
Loading...
or support indie stores by buying on