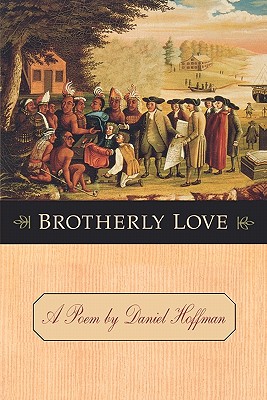 Brotherly Love is a long poem that evokes William Penn's luminous vision of America and shows what has become of it as the intractable conflicts of our history--struggles over the land, keeping faith with the Indians, the uses and abuses of power--threaten Penn's ideal.

Daniel Hoffman began writing Brotherly Love while he was Poet Laureate of the United States, in 1973-74 (the appointment then called Consultant in Poetry of the Library of Congress). Widely hailed, the book was a finalist for both the National Book Award and the National Book Critics Circle Award in 1981. It is adapted as the libretto for Ezra Laderman's music in the oratorio Brotherly Love, premiered by the Philadelphia Singers in March 2000.

Author of eight other books of poetry, Daniel Hoffman has published several critical studies, of which the best known may be Poe Poe Poe Poe Poe Poe Poe, also a finalist for the National Book Award. Hoffman taught for ten years at Swarthmore College and then, for twenty-seven, at the University of Pennsylvania, where he is Poet in Residence and Felix E. Schelling Professor of English Emeritus. From 1988 to 1999, he served as Poet in Residence of the Cathedral of St. John the Divine in New York City and administered the American Poets' Corner. In 2004 he received the Aiken Taylor Award for Modern American Poetry, the seventeenth poet so recognized by The Sewanee Review, America's oldest literary quarterly.
Loading...
or support indie stores by buying on