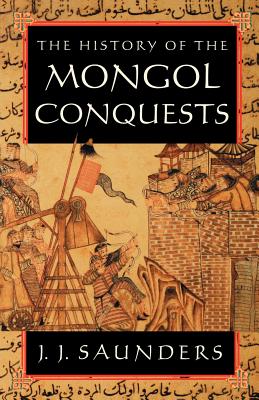 The History of the Mongol Conquests

The Mongol conquests, culminating with the invasion of Europe in the middle of the thirteenth century, were of a scope and range never equaled. These nomadic peoples from central Asia briefly held sway over an empire that stretched across Asia to the frontiers of Germany and the shores of the Adriatic. Surprisingly little has been written on this vast and immensely influential empire, known chiefly through the charismatic leaders, Chingis Khan and Kublai Khan.

J. J. Saunders's landmark book, first published in 1972, is a carefully documented introductory history of the rise and fall of the great Mongol empire. Saunders sets the historical stage with a discussion of nomad groups and cultures at the dawn of the second millennium, and then traces the rise of the Mongol conquests through the earlier Turkish expansion into Asia between the eighth and twelfth centuries. Beginning in the early 1200s, the Mongols led by Chingis Khan began their insatiable assault on all the kingdoms and peoples around them, erasing whole cities, killing entire populations, forcing mass migrations, and permanently changing the distribution of the world's major religions. The Mongols were finally checked along the edges of Europe and forced out of the Middle East by rejuvenated Muslim factions.

As Saunders concludes, one of the major legacies of the Mongol conquests was the transfer of intellectual and scientific primacy of the Old World from Islamic societies to Western Europe, paving the way for the Renaissance.

J. J. Saunders was Reader in History at the University of Canterbury, New Zealand. He is author of A History of Medieval Islam.
Loading...
or support indie stores by buying on