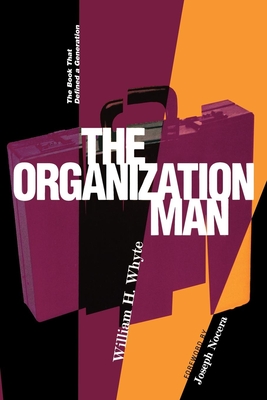 The Book That Defined a Generation

Regarded as one of the most important sociological and business commentaries of modern times, The Organization Man developed the first thorough description of the impact of mass organization on American society. During the height of the Eisenhower administration, corporations appeared to provide a blissful answer to postwar life with the marketing of new technologies--television, affordable cars, space travel, fast food--and lifestyles, such as carefully planned suburban communities centered around the nuclear family. William H. Whyte found this phenomenon alarming.

As an editor for Fortune magazine, Whyte was well placed to observe corporate America; it became clear to him that the American belief in the perfectibility of society was shifting from one of individual initiative to one that could be achieved at the expense of the individual. With its clear analysis of contemporary working and living arrangements, The Organization Man rapidly achieved bestseller status. Since the time of the book's original publication, the American workplace has undergone massive changes. In the 1990s, the rule of large corporations seemed less relevant as small entrepreneurs made fortunes from new technologies, in the process bucking old corporate trends. In fact this new economy appeared to have doomed Whyte's original analysis as an artifact from a bygone day. But the recent collapse of so many startup businesses, gigantic mergers of international conglomerates, and the reality of economic globalization make The Organization Man all the more essential as background for understanding today's global market. This edition contains a new foreword by noted journalist and author Joseph Nocera. In an afterword Jenny Bell Whyte describes how The Organization Man was written.

William H. Whyte (1917-1999) was editor of Fortune magazine and Distinguished Professor at Hunter College of the City University of New York. He is the author of numerous books of social and environmental analysis, including The Last Landscape, also available from the University of Pennsylvania Press. Joseph Nocera, Fortune magazine executive editor, is an award-winning financial journalist. He is the author of A Piece of the Action: How the Middle Class Joined the Money Class, which won the New York Public Library's Helen Bernstein Award for Excellence in Journalism, and he anchored the 1997 PBS Frontline documentary Betting on the Market. Jenny Bell Whyte, a fashion designer, is credited with introducing African textiles to the mainstream American clothing market. Her current company, Museum Pieces to Wear, restores old textiles and incorporates them into new clothes. She and William H. Whyte were married in 1964.
Loading...
or support indie stores by buying on