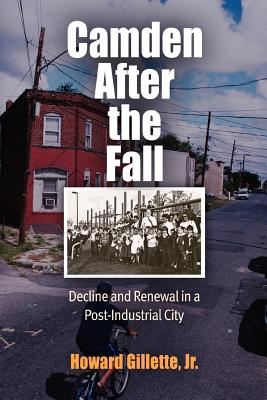 Camden After the Fall (Paperback)

What prevents cities whose economies have been devastated by the flight of human and monetary capital from returning to self-sufficiency? Looking at the cumulative effects of urban decline in the classic post-industrial city of Camden, New Jersey, historian Howard Gillette, Jr., probes the interaction of politics, economic restructuring, and racial bias to evaluate contemporary efforts at revitalization. In a sweeping analysis, Gillette identifies a number of related factors to explain this phenomenon, including the corrosive effects of concentrated poverty, environmental injustice, and a political bias that favors suburban amenity over urban reconstruction.

Challenging popular perceptions that poor people are responsible for the untenable living conditions in which they find themselves, Gillette reveals how the effects of political decisions made over the past half century have combined with structural inequities to sustain and prolong a city's impoverishment. Even the most admirable efforts to rebuild neighborhoods through community development and the reinvention of downtowns as tourist destinations are inadequate solutions, Gillette argues. He maintains that only a concerted regional planning response--in which a city and suburbs cooperate--is capable of achieving true revitalization. Though such a response is mandated in Camden as part of an unprecedented state intervention, its success is still not assured, given the legacy of outside antagonism to the city and its residents.

Deeply researched and forcefully argued, Camden After the Fall chronicles the history of the post-industrial American city and points toward a sustained urban revitalization strategy for the twenty-first century.

Howard Gillette, Jr., is Professor of History at Rutgers University and the author of Between Justice and Beauty: Race, Planning, and the Failure of Urban Policy in Washington, D.C, also available from the University of Pennsylvania Press.
or support indie stores by buying on
Copyright © 2020 American Booksellers Association