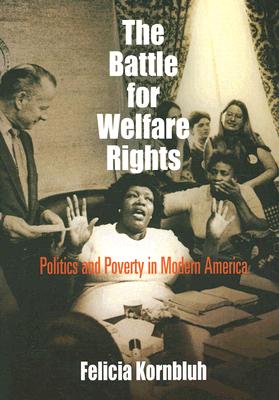 The Battle for Welfare Rights (Paperback)

The Battle for Welfare Rights chronicles an American war on poverty fought first and foremost by poor people themselves. It tells the fascinating story of the National Welfare Rights Organization, the largest membership organization of low-income people in U.S. history. Setting that story in the context of its turbulent times, the 1960s and early 1970s, historian Felicia Kornbluh shows how closely tied that story was to changes in mainstream politics, both nationally and locally in New York City.

The Battle for Welfare Rights offers new insight into women's activism, poverty policy, civil rights, urban politics, law, consumerism, social work, and the rise of modern conservatism. It tells, for the first time, the complete story of a movement that profoundly affected the meaning of citizenship and the social contract in the United States.

Felicia Kornbluh teaches history at Duke University. She has written for many publications, including The Nation, Feminist Studies, Los Angeles Times, Women's Review of Books, Journal of American History, and In These Times. Cofounder of Historians for Social Justice, she is a long-standing member of the Women's Committee of 100, an advocacy organization.
or support indie stores by buying on
Copyright © 2020 American Booksellers Association