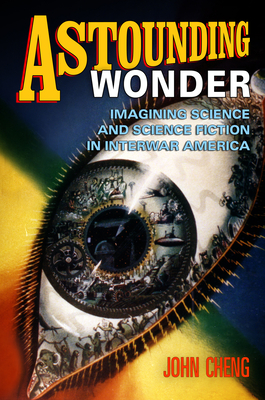 When physicist Robert Goddard, whose career was inspired by H. G. Wells's War of the Worlds, published "A Method of Reaching Extreme Altitudes," the response was electric. Newspaper headlines across the country announced, "Modern Jules Verne Invents Rocket to Reach Moon," while people from around the world, including two World War I pilots, volunteered as pioneers in space exploration. Though premature (Goddard's rocket, alas, was only imagined), the episode demonstrated not only science's general popularity but also its intersection with interwar popular and commercial culture. In that intersection, the stories that inspired Goddard and others became a recognizable genre: science fiction. Astounding Wonder explores science fiction's emergence in the era's "pulps," colorful magazines that shouted from the newsstands, attracting an extraordinarily loyal and active audience.

Pulps invited readers not only to read science fiction but also to participate in it, joining writers and editors in celebrating a collective wonder for and investment in the potential of science. But in conjuring fantastic machines, travel across time and space, unexplored worlds, and alien foes, science fiction offered more than rousing adventure and romance. It also assuaged contemporary concerns about nation, gender, race, authority, ability, and progress--about the place of ordinary individuals within modern science and society--in the process freeing readers to debate scientific theories and implications separate from such concerns.

Readers similarly sought to establish their worth and place outside the pulps. Organizing clubs and conventions and producing their own magazines, some expanded science fiction's community and created a fan subculture separate from the professional pulp industry. Others formed societies to launch and experiment with rockets. From debating relativity and the use of slang in the future to printing purple fanzines and calculating the speed of spaceships, fans' enthusiastic industry revealed the tensions between popular science and modern science. Even as it inspired readers' imagination and activities, science fiction's participatory ethos sparked debates about amateurs and professionals that divided the worlds of science fiction in the 1930s and after.