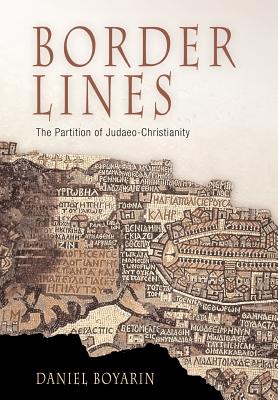 "This is an imaginative--in the most positive sense--and creative reading of the emergence of Christianity and Judaism."--Judith Lieu, author of The Theology of the Johannine Epistles "A complex and erudite rereading of the relationship between early Christianity, rabbinic Judaism, and their respective heretics. . . . A truly remarkable achievement."--Stimulus "Encourages us to see historic Christianity as but one expression of a universalistic potential in Jewish monotheism. . . . In a fruitful career not yet nearly over, Border Lines, the culmination of many years of work, may well remain Daniel Boyarin's masterpiece."--Commonweal "Boyarin's book challenges the ordinary usage of the terms 'Judaism' and 'Christianity' and juxtaposes the formation of orthodoxy as it is formulated within rabbinic tradition and among Christians of the patristic period. His bold thesis will no doubt prove controversial and important."--Elaine Pagels, author of Beyond Belief: The Secret Gospel of Thomas The historical separation between Judaism and Christianity is often figured as a clearly defined break of a single entity into two separate religions. Following this model, there would have been one religion known as Judaism before the birth of Christ, which then took on a hybrid identity. Even before its subsequent division, certain beliefs and practices of this composite would have been identifiable as Christian or Jewish. In Border Lines, however, Daniel Boyarin makes a striking case for a very different way of thinking about the historical development that is the partition of Judaeo-Christianity. There were no characteristics or features that could be described as uniquely Jewish or Christian in late antiquity, Boyarin argues. Rather, Jesus-following Jews and Jews who did not follow Jesus lived on a cultural map in which beliefs, such as that in a second divine being, and practices, such as keeping kosher or maintaining the Sabbath, were widely and variably distributed. The ultimate distinctions between Judaism and Christianity were imposed from above by "border-makers," heresiologists anxious to construct a discrete identity for Christianity. By defining some beliefs and practices as Christian and others as Jewish or heretical, they moved ideas, behaviors, and people to one side or another of an artificial border--and, Boyarin significantly contends, invented the very notion of religion. Boyarin demonstrates that it was early Christian writers who first imagined religion as a realm of practice and belief that could be separated from the broader cultural network of language, genealogy, or geography, and that they did so precisely to give Christians an identity. In the end, he suggests, the Rabbis refused the option offered by the Christian empire of converting Judaism into such a religion. Christianity, a religion, and Judaism, something that was not a religion, stood on opposite sides of a borderline drawn more or less successfully across their respective populations. As a consequence, "Jewish" to this day is an adjective that can describe both an ethnicity and a set of beliefs, while Christian orthodoxy remains, perhaps, the only religion on earth. Daniel Boyarin is the Taubman Professor of Talmudic Culture in the Departments of Near Eastern Studies and Rhetoric at the University of California, Berkeley. He is the author of Dying for God: Martyrdom and the Making of Christianity and Judaism and A Radical Jew: Paul and the Politics of Identity.

Daniel Boyarin is the Taubman Professor of Talmudic Culture in the Departments of Near Eastern Studies and Rhetoric at the University of California, Berkeley. He is the author of Dying for God: Martyrdom and the Making of Christianity, Judaism and A Radical Jew: Paul and the Politics of Identity, and other books.
Loading...
or support indie stores by buying on