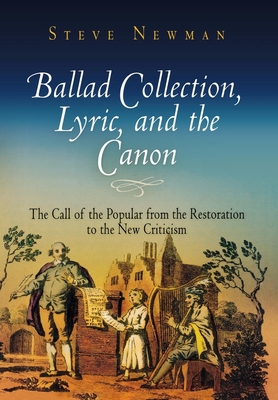 Ballad Collection, Lyric, and the Canon

Ballad Collection, Lyric, and the Canon The Call of the Popular from the Restoration to the New Criticism Steve Newman "Elegant and original in its formulations, Ballad Collection, Lyric, and the Canon provides a new starting place for thinking about the presence and meanings of the ballad within modern poetics."--Anne Janowitz, Queen Mary, University of London "A timely contribution to the growing area of interest in popular culture, particularly as it affects the long eighteenth century."--Murray Pittock, University of Manchester The humble ballad, defined in 1728 as "a song commonly sung up and down the streets," was widely used in elite literature in the eighteenth century and beyond. Authors ranging from John Gay to William Blake to Felicia Hemans incorporated the seemingly incongruous genre of the ballad into their work. Ballads were central to the Scottish Enlightenment's theorization of culture and nationality, to Shakespeare's canonization in the eighteenth century, and to the New Criticism's most influential work, Understanding Poetry. Just how and why did the ballad appeal to so many authors from the Restoration period to the end of the Romantic era and into the twentieth century? Exploring the widespread breach of the wall that separated "high" and "low," Steve Newman challenges our current understanding of lyric poetry. He shows how the lesser lyric of the ballad changed lyric poetry as a whole and, in so doing, helped to transform literature from polite writing in general into the body of imaginative writing that became known as the English literary canon. For Newman, the ballad's early lack of prestige actually increased its value for elite authors after 1660. Easily circulated and understood, ballads moved literature away from the exclusive domain of the courtly, while keeping it rooted in English history and culture. Indeed, elite authors felt freer to rewrite and reshape the common speech of the ballad. Newman also shows how the ballad allowed authors to access the "common" speech of the public sphere, while avoiding what they perceived as the unpalatable qualities of that same public's increasingly avaricious commercial society. Steve Newman teaches English at Temple University. 2007 304 pages 6 x 9 3 illus. ISBN 978-0-8122-4009-2 Cloth $65.00s 42.50 ISBN 978-0-8122-0293-9 Ebook $65.00s 42.50 World Rights Literature Short copy: Compelling and insightful, Ballad Collection, Lyric, and the Canon makes an important contribution to our understanding of the ballad and its long-ranging impact on the institution of literature.