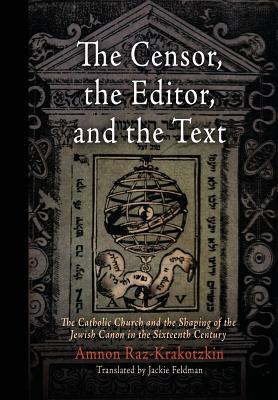 The Censor, the Editor, and the Text

In The Censor, the Editor, and the Text, Amnon Raz-Krakotzkin examines the impact of Catholic censorship on the publication and dissemination of Hebrew literature in the early modern period. Hebrew literature made the transition to print in Italian print houses, most of which were owned by Christians. These became lively meeting places for Christian scholars, rabbis, and the many converts from Judaism who were employed as editors and censors.

Raz-Krakotzkin examines the principles and practices of ecclesiastical censorship that were established in the second half of the sixteenth century as a part of this process. The book examines the development of censorship as part of the institutionalization of new measures of control over literature in this period, suggesting that we view surveillance of Hebrew literature not only as a measure directed against the Jews but also as a part of the rise of Hebraist discourse and therefore as a means of integrating Jewish literature into the Christian canon. On another level, The Censor, the Editor, and the Text explores the implications of censorship in relation to other agents that participated in the preparation of texts for publishing--authors, publishers, editors, and readers. The censorship imposed upon the Jews had a definite impact on Hebrew literature, but it hardly denied its reading, in fact confirming the right of the Jews to possess and use most of their literature. By bringing together two apparently unrelated issues--the role of censorship in the creation of print culture and the place of Jewish culture in the context of Christian society--Raz-Krakotzkin advances a new outlook on both, allowing each to be examined through the conceptual framework usually reserved for the other.

Amnon Raz-Krakotzkin is Senior Lecturer in History at Ben-Gurion University of the Negev.
Loading...
or support indie stores by buying on