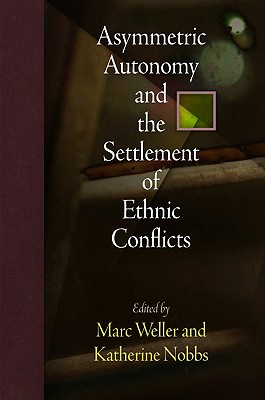 Asymmetric Autonomy and the Settlement of Ethnic Conflicts (Hardcover)

Throughout the world many sovereign states grant one or more of their territories greater autonomy than other areas. This arrangement, known as asymmetric autonomy, has been adopted with greater regularity as a solution to ethnic strife and secessionist struggles in recent decades. As asymmetric autonomy becomes one of the most frequently used conflict resolution methods, examination of the positive and negative consequences of its implementation, as well as its efficacy, is vital.

Asymmetric Autonomy and the Settlement of Ethnic Conflicts assesses the ability of such power distribution arrangements to resolve violent struggles between central governments and separatist groups. This collection of new case studies from around the world covers a host of important developments, from recentralization in Russia, to "one country, two systems" in China, to constitutional innovation in Iraq. As a whole, these essays examine how well asymmetric autonomy agreements can bring protracted and bloody conflicts to an end, satisfy the demands of both sides, guarantee the physical integrity of a state, and ensure peace and stability. Contributors to this book also analyze the many problems and dilemmas that can arise when autonomous regions are formed. For example, powers may be loosely defined or unrealistically assigned to the state within a state. Redrawn boundaries can create new minorities and make other groups vulnerable to human rights violations. Given the number of limited self-determination systems in place, the essays in this volume present varied evaluations of these political structures.

Asymmetric state agreements have the potential to remedy some of humanity's most intractable disputes. In Asymmetric Autonomy and the Settlement of Ethnic Conflicts, leading political scientists and diplomatic experts shed new light on the practical consequences of these settlements and offer sophisticated frameworks for understanding this path toward lasting peace.