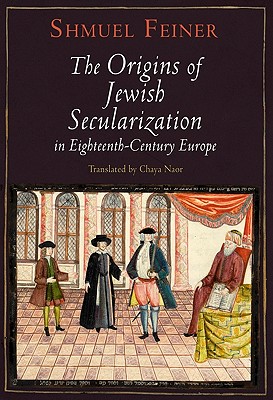 Throughout the eighteenth century, an ever-sharper distinction emerged between Jews of the old order and those who were self-consciously of a new world. As aspirations for liberation clashed with adherence to tradition, as national, ethnic, cultural, and other alternatives emerged and a long, circuitous search for identity began, it was no longer evident that the definition of Jewishness would be based on the beliefs and practices surrounding the study of the Torah.

In The Origins of Jewish Secularization in Eighteenth-Century Europe Shmuel Feiner reconstructs this evolution by listening to the voices of those who participated in the process and by deciphering its cultural codes and meanings. On the one hand, a great majority of observant Jews still accepted the authority of the Talmud and the leadership of the rabbis; on the other, there was a gradually more conspicuous minority of "Epicureans" and "freethinkers." As the ground shifted, each individual was marked according to his or her place on the path between faith and heresy, between devoutness and permissiveness or indifference.

Building on his award-winning Jewish Enlightenment, Feiner unfolds the story of critics of religion, mostly Ashkenazic Jews, who did not take active part in the secular intellectual revival known as the Haskalah. In open or concealed rebellion, Feiner's subjects lived primarily in the cities of western and central Europe--Altona-Hamburg, Amsterdam, London, Berlin, Breslau, and Prague. They participated as "fashionable" Jews adopting the habits and clothing of the surrounding Gentile society. Several also adopted the deist worldview of Enlightenment Europe, rejecting faith in revelation, the authority of Scripture, and the obligation to observe the commandments.

Peering into the synagogue, observing individuals in the coffeehouse or strolling the boulevards, and peeking into the bedroom, Feiner recovers forgotten critics of religion from both the margins and the center of Jewish discourse. His is a pioneering work on the origins of one of the most significant transformations of modern Jewish history.

Shmuel Feiner is Professor of Modern Jewish History at Bar-Ilan University and Chairman of the Jerusalem Leo Baeck Institute. Among his many books is The Jewish Enlightenment, winner of the Koret Jewish Book Award in History and also published by the University of Pennsylvania Press.
Loading...
or support indie stores by buying on