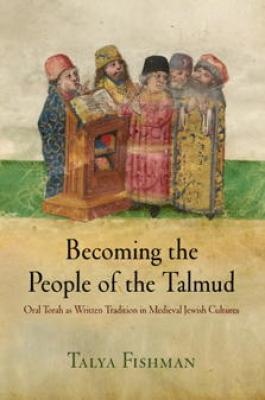 Becoming the People of the Talmud

In "Becoming the People of the Talmud," Talya Fishman examines ways in which circumstances of transmission have shaped the cultural meaning of Jewish traditions. Although the Talmud's preeminence in Jewish study and its determining role in Jewish practice are generally taken for granted, Fishman contends that these roles were not solidified until the late eleventh and early twelfth centuries. The inscription of Talmud--which Sefardi Jews understand to have occurred quite early, and Ashkenazi Jews only later--precipitated these developments. The encounter with Oral Torah as a written corpus was transformative for both subcultures, and it shaped the roles that Talmud came to play in Jewish life.

What were the historical circumstances that led to the inscription of Oral Torah in medieval Europe? How did this body of ancient rabbinic traditions, replete with legal controversies and nonlegal material, come to be construed as a reference work and prescriptive guide to Jewish life? Connecting insights from geonica, medieval Jewish and Christian history, and orality-textuality studies, "Becoming the People of the Talmud" reconstructs the process of cultural transformation that occurred once medieval Jews encountered the Babylonian Talmud as a written text. According to Fishman, the ascription of greater authority to written text was accompanied by changes in reading habits, compositional predilections, classroom practices, approaches to adjudication, assessments of the past, and social hierarchies. She contends that certain medieval Jews were aware of these changes: some noted that books had replaced teachers; others protested the elevation of Talmud-centered erudition and casuistic virtuosity into standards of religious excellence, at the expense of spiritual refinement. The book concludes with a consideration of Rhineland Pietism's emergence in this context and suggests that two contemporaneous phenomena--the prominence of custom in medieval Ashkenazi culture and the novel Christian attack on Talmud--were indirectly linked to the new eminence of this written text in Jewish life.

Talya Fishman is Associate Professor of Near Eastern Languages and Civilizations at the University of Pennsylvania. She is the author of Shaking the Pillars of Exile: "Voice of a Fool," an Early Modern Jewish Critique of Rabbinic Culture.
Loading...
or
Not Currently Available for Direct Purchase