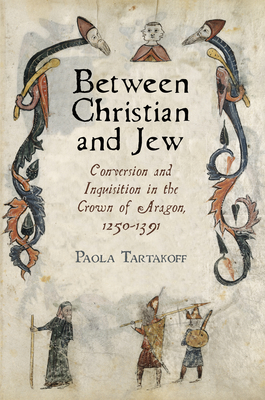 Between Christian and Jew

Conversion and Inquisition in the Crown of Aragon, 1250-1391 (Middle Ages)

In 1341 in Aragon, a Jewish convert to Christianity was sentenced to death, only to be pulled from the burning stake and into a formal religious interrogation. His confession was as astonishing to his inquisitors as his brush with mortality is to us: the condemned man described a Jewish conspiracy to persuade recent converts to denounce their newfound Christian faith. His claims were corroborated by witnesses and became the catalyst for a series of trials that unfolded over the course of the next twenty months. Between Christian and Jew closely analyzes these events, which Paola Tartakoff considers paradigmatic of inquisitorial proceedings against Jews in the period. The trials also serve as the backbone of her nuanced consideration of Jewish conversion to Christianity--and the unwelcoming Christian response to Jewish conversions--during a period that is usually celebrated as a time of relative interfaith harmony.

The book lays bare the intensity of the mutual hostility between Christians and Jews in medieval Spain. Tartakoff's research reveals that the majority of Jewish converts of the period turned to baptism in order to escape personal difficulties, such as poverty, conflict with other Jews, or unhappy marriages. They often met with a chilly reception from their new Christian brethren, making it difficult to integrate into Christian society. Tartakoff explores Jewish antagonism toward Christians and Christianity by examining the aims and techniques of Jews who sought to re-Judaize apostates as well as the Jewish responses to inquisitorial prosecution during an actual investigation. Prosecutions such as the 1341 trial were understood by papal inquisitors to be in defense of Christianity against perceived Jewish attacks, although Tartakoff shows that Christian fears about Jewish hostility were often exaggerated. Drawing together the accounts of Jews, Jewish converts, and inquisitors, this cultural history offers a broad study of interfaith relations in medieval Iberia.

Paola Tartakoff is Professor of History and Jewish Studies at Rutgers, the State University of New Jersey.
Loading...
or
Not Currently Available for Direct Purchase