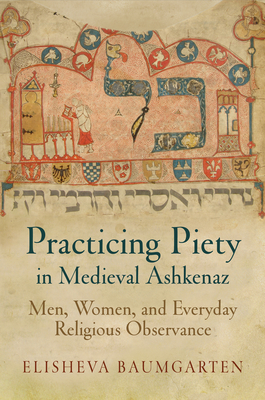 In the urban communities of medieval Germany and northern France, the beliefs, observances, and practices of Jews allowed them to create and define their communities on their own terms as well as in relation to the surrounding Christian society. Although medieval Jewish texts were written by a learned elite, the laity also observed many religious rituals as part of their everyday life. In Practicing Piety in Medieval Ashkenaz, Elisheva Baumgarten asks how Jews, especially those who were not learned, expressed their belonging to a minority community and how their convictions and deeds were made apparent to both their Jewish peers and the Christian majority.

Practicing Piety in Medieval Ashkenaz provides a social history of religious practice in context, particularly with regard to the ways Jews and Christians, separately and jointly, treated their male and female members. Medieval Jews often shared practices and beliefs with their Christian neighbors, and numerous notions and norms were appropriated by one community from the other. By depicting a dynamic interfaith landscape and a diverse representation of believers, Baumgarten offers a fresh assessment of Jewish practice and the shared elements that composed the piety of Jews in relation to their Christian neighbors.

Elisheva Baumgarten is Professor Yitzhak Becker Chair of Jewish Studies and Professor of Jewish History and History at the Hebrew University of Jerusalem and coeditor of Entangled Histories: Knowledge, Authority, and Jewish Culture in the Thirteenth Century, also available from the University of Pennsylvania Press..
Loading...
or
Not Currently Available for Direct Purchase