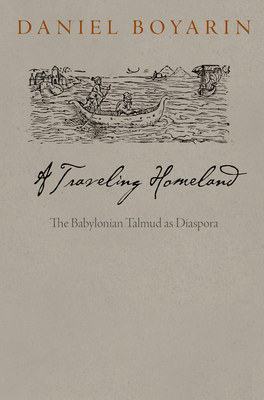 A word conventionally imbued with melancholy meanings, "diaspora" has been used variously to describe the cataclysmic historical event of displacement, the subsequent geographical scattering of peoples, or the conditions of alienation abroad and yearning for an ancestral home. But as Daniel Boyarin writes, diaspora may be more constructively construed as a form of cultural hybridity or a mode of analysis. In A Traveling Homeland, he makes the case that a shared homeland or past and traumatic dissociation are not necessary conditions for diaspora and that Jews carry their homeland with them in diaspora, in the form of textual, interpretive communities built around talmudic study.

For Boyarin, the Babylonian Talmud is a diasporist manifesto, a text that produces and defines the practices that constitute Jewish diasporic identity. Boyarin examines the ways the Babylonian Talmud imagines its own community and sense of homeland, and he shows how talmudic commentaries from the medieval and early modern periods also produce a doubled cultural identity. He links the ongoing productivity of this bifocal cultural vision to the nature of the book: as the physical text moved between different times and places, the methods of its study developed through contact with surrounding cultures. Ultimately, A Traveling Homeland envisions talmudic study as the center of a shared Jewish identity and a distinctive feature of the Jewish diaspora that defines it as a thing apart from other cultural migrations.

Daniel Boyarin is Hermann P. and Sophia Taubman Professor of Talmudic Culture, Departments of Near Eastern Studies and Rhetoric, University of California, Berkeley. He is author of many books, including Border Lines: The Partition of Judaeo-Christianity, also available from the University of Pennsylvania Press.
Loading...
or support indie stores by buying on