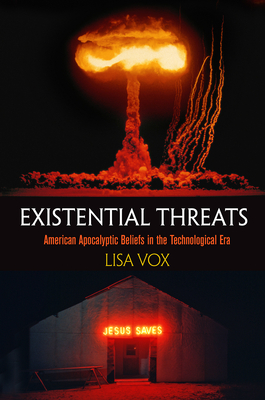 Americans have long been enthralled by visions of the apocalypse. Will the world end through nuclear war, environmental degradation, and declining biodiversity? Or, perhaps, through the second coming of Christ, rapture of the faithful, and arrival of the Antichrist--a set of beliefs known as dispensationalist premillennialism? These seemingly competing apocalyptic fantasies are not as dissimilar as we might think. In fact, Lisa Vox argues, although these secular and religious visions of the end of the world developed independently, they have converged to create the landscape of our current apocalyptic imagination.

In Existential Threats, Vox assembles a wide range of media--science fiction movies, biblical tractates, rapture fiction--to develop a critical history of the apocalyptic imagination from the late 1800s to the present. Apocalypticism was once solely a religious ideology, Vox contends, which has secularized in response to increasing technological and political threats to American safety. Vox reads texts ranging from Christianity Today articles on ecology and the atomic bomb to Dr. Strangelove, and from Mary Shelley's The Last Man to the Left Behind series by Tim LaHaye and Jerry B. Jenkins, demonstrating along the way that conservative evangelicals have not been as resistant to science as popularly believed and that scientists and science writers have unwittingly reproduced evangelical eschatological themes and scenarios in their own works. Existential Threats argues that American apocalypticism reflects and propagates our ongoing debates over the authority of science, the place of religion, uses of technology, and America's evolving role in global politics.