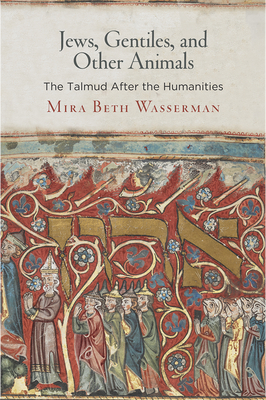 Jews, Gentiles, and Other Animals

The Talmud After the Humanities (Divinations: Rereading Late Ancient Religion)

In Jews, Gentiles, and Other Animals, Mira Beth Wasserman undertakes a close reading of Avoda Zara, arguably the Talmud's most scandalous tractate, to uncover the hidden architecture of this classic work of Jewish religious thought. She proposes a new way of reading the Talmud that brings it into conversation with the humanities, including animal studies, the new materialisms, and other areas of critical theory that have been reshaping the understanding of what it is to be a human being.

Even as it comments on the the rabbinic laws that govern relations between Jews and non-Jews, Avoda Zara is also an attempt to reflect on what all people share in common, and on how humans fit into a larger universe of animals and things. As is typical of the Talmud in general, it proceeds by incorporating a vast and confusing array of apparently digressive materials, but Wasserman demonstrates that there is a whole greater than the sum of the parts, a sustained effort to explore human identity and difference.

In centuries past, Avoda Zara has been a flashpoint in Jewish-Christian relations. It was partly due to its content that the Talmud was subject to burning and censorship by Christian authorities. Wasserman develops a twenty-first-century reading of the tractate that aims to reposition it as part of a broader quest to understand what connects human beings to each other and to the world around them.