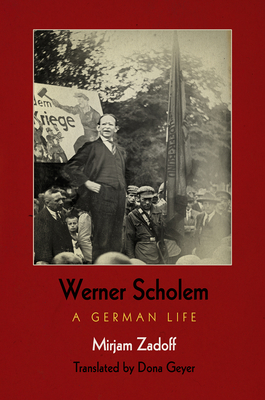 Werner Scholem never took the easy path. Born in 1895 into the Berlin Jewish middle class, he married a young non-Jewish woman of proletarian background. He was the youngest member of the Prussian Parliament in the 1920s, one of the leaders of the German Communist Party, and the editor of the influential journal The Red Flag. As an outspoken critic of Stalin, he was soon expelled from the party, only to take up a position at the head of a revolutionary Trotskyite faction in the years before 1933. Reviled by the National Socialists as a Communist and a Jew, he was among the first to be arrested when Hitler rose to power and, after a long incarceration, was murdered in Buchenwald.

In Werner Scholem: A German Life Mirjam Zadoff has written a book that is at once a biography of an individual, a family chronicle, and the story of an entire era. It is an account of the ruptures within a society and of the growing insecurity in which German Jews lived between the two world wars--and especially of two brothers who chose opposing paths out of the shared conviction that there was no future for Jews in Germany after the First World War. While Werner pinned his hopes on a universal revolution he would never see, the younger Gerhard emigrated to Palestine where, as Gershom, he would choose revolutionary Zionism and the reanimation of ancient strains of Jewish mysticism.

Mirjam Zadoff is the Alvin H. Rosenfeld Chair in Jewish Studies and Associate Professor of History at Indiana University Bloomington. She is author of Next Year in Marienbad: The Lost Worlds of Jewish Spa Culture, awarded the Salo Wittmayer Baron Book Prize in Jewish Studies and also available from the University of Pennsylvania Press.
or support indie stores by buying on
Copyright © 2020 American Booksellers Association