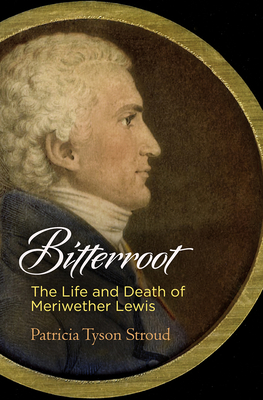 The Life and Death of Meriwether Lewis

In America's early national period, Meriwether Lewis was a towering figure. Selected by Thomas Jefferson to lead the expedition to explore the Louisiana Purchase, he was later rewarded by Jefferson with the governorship of the entire Louisiana Territory. Yet within three years, plagued by controversy over administrative expenses, Lewis found his reputation and career in tatters. En route to Washington to clear his name, he died mysteriously in a crude cabin on the Natchez Trace in Tennessee. Was he a suicide, felled by his own alcoholism and mental instability? Most historians have agreed. Patricia Tyson Stroud reads the evidence to posit another, even darker, ending for Lewis.

Stroud uses Lewis's find, the bitterroot flower, with its nauseously pungent root, as a symbol for his reputation as a purported suicide. It was this reputation that Thomas Jefferson promulgated in the memoir he wrote prefacing the short account of Lewis's historic expedition published five years after his death. Without investigation of any kind, Jefferson, Lewis's mentor from boyhood, reiterated undocumented assertions of Lewis's serious depression and alcoholism.

That Lewis was the courageous leader of the first expedition to explore the continent from the Mississippi River to the Pacific Ocean has been overshadowed by presuppositions about the nature of his death. Stroud peels away the layers of misinformation and gossip that have obscured Lewis's rightful reputation. Through a retelling of his life, from his resourceful youth to the brilliance of his leadership and accomplishments as a man, Bitterroot shows that Jefferson's mystifying assertion about the death of his prot g is the long-held bitter root of the Meriwether Lewis story.

Patricia Tyson Stroud is an independent scholar. She is author of Thomas Say: New World Naturalist, The Emperor of Nature: Charles-Lucien Bonaparte and His World, The Man Who Had Been King: The American Exile of Napoleon's Brother Joseph, and, with Robert McCracken Peck, A Glorious Enterprise: The Academy of Natural Sciences of Philadelphia and the Making of American Science, all of which are available from the University of Pennsylvania Press.
Loading...
or support indie stores by buying on