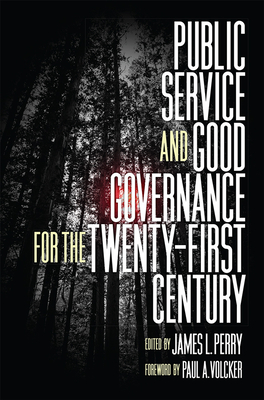 Public Service and Good Governance for the Twenty-First Century

Expert analysis of American governance challenges and recommendations for reform

Two big ideas serve as the catalyst for the essays collected in this book. The first is the state of governance in the United States, which Americans variously perceive as broken, frustrating, and unresponsive. Editor James Perry observes in his Introduction that this perception is rooted in three simultaneous developments: government's failure to perform basic tasks that once were taken for granted, an accelerating pace of change that quickly makes past standards of performance antiquated, and a dearth of intellectual capital that generate the capacity to bridge the gulf between expectations and performance. The second idea hearkens back to the Progressive era, when Americans revealed themselves to be committed to better administration of their government at all levels--federal, state, and local.

These two ideas--the diminishing capacity for effective governance and Americans' expectations for reform--are veering in opposite directions. Contributors to Public Service and Good Governance for the Twenty-First Century explore these central ideas by addressing such questions as: what is the state of government today? Can future disruptions of governance and public service be anticipated? What forms of government will emerge from the past and what institutions and structures will be needed to meet future challenges? And lastly, and perhaps most importantly, what knowledge, skills, and abilities will need to be fostered for tomorrow's civil servants to lead and execute effectively?

Public Service and Good Governance for the Twenty-First Century offers recommendations for bending the trajectories of governance capacity and reform expectations toward convergence, including reversing the trend of administrative disinvestment, developing talent for public leadership through higher education, creating a federal civil service to meet future needs, and rebuilding bipartisanship so that the sweeping changes needed to restore good government become possible.

James L. Perry is Distinguished Professor Emeritus in the Paul H. O'Neill School of Public and Environmental Affairs at Indiana University, Bloomington. Paul A. Volcker (1927-2019) was Founder and Chairman of the Volcker Alliance. He was Chairman of the Federal Reserve under Presidents Jimmy Carter and Ronald Reagan from 1979 to 1987.
Loading...
or support indie stores by buying on