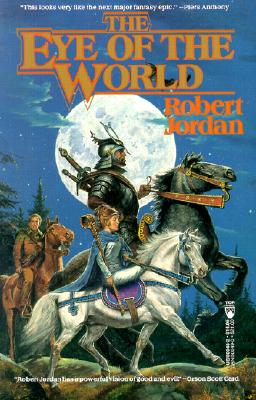 
Praise For The Eye of the World…

"Jordan has come to dominate the world that Tolkien began to reveal."--The New York Times

"Jordan is able to take...familiar elements and make them his own, in a powerful novel of wide and complex scope. Open religious and political conflicts add a gritty realism, while the cities and courts provide plenty of drama and splendor. Women have a stronger role than in Tolkien...Each character in this large cast remains distinct....Their adventures are varied, and exciting....The Eye of the World stands alone as a fantasy epic."--Locus

"Robert Jordan has created a fantasy world as tangible and credible as history. He has a fine eye for detail and a vivid sense of drama."--Morgan Llewelyn

Robert Jordan was born in 1948 in Charleston, South Carolina. He taught himself to read when he was four with the incidental aid of a twelve-years-older brother, and was tackling Mark Twain and Jules Verne by five. He is a graduate of The Citadel, the Military College of South Carolina, with a degree in physics. He served two tours in Vietnam with the U.S. Army; among his decorations are the Distinguished Flying Cross with bronze oak leaf cluster, the Bronze Star with "V" and bronze oak leaf cluster, and two Vietnamese Gallantry Crosses with palm. A history buff, he has also written dance and theater criticism and enjoyed the outdoor sports of hunting, fishing, and sailing, and the indoor sports of poker, chess, pool, and pipe collecting.

Robert Jordan began writing in 1977 and went on to write The Wheel of Time(r), one of the most important and best selling series in the history of fantasy publishing with over 14 million copies sold in North America, and countless more sold abroad.

Robert Jordan died on September 16, 2007, after a courageous battle with the rare blood disease amyloidosis.
Loading...
or support indie stores by buying on
(This book is on backorder)