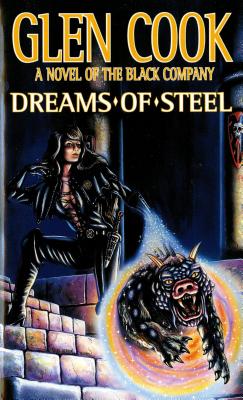 "Dreams of Steel" is Book 5 in Glen Cook's fantasy masterpiece, The Chronicles of the Black Company.

Croaker has fallen and, following the Company's disastrous defeat at Dejagore, Lady is one of the few survivors determined to avenge the Company and herself against the Shadowmasters, no matter what the cost.

But in assembling a new fighting force from the dregs and rabble of Taglios, she finds herself offered help by a mysterious, ancient cult of murder competent, reliable, and apparently committed to her goals.

Meanwhile, far away, Shadowmasters conspire against one another and the world, weaving dark spells that reach into the heart of Taglios. And in a hidden grove, a familiar figure slowly awakens to find himself the captive of an animated, headless corpse.

Mercilessly cutting through Taglian intrigues, Lady appears to be growing stronger every day. All that disturbs her are the dreams which afflict her by night dreams of carnage, of destruction, of universal death, unceasing...


Praise For Dreams of Steel…

"Sheer page-turning fun--indeed, sometimes I turned the pages so quickly in the heat of adventure that I had to turn back again to see what actually happened!"
--Robin McKinley, author of The Hero and the Crown

Born in 1944, Glen Cook grew up in northern California, served in the U.S. Navy, attended the University of Missouri, and was one of the earliest graduates of the well-known "Clarion" workshop SF writers. Since 1971 he has published a large number of SF and fantasy novels, including the "Dread Empire" series, the occult-detective "Garrett" novels, and the very popular "Black Company" sequence that began with the publication of "The Black Company" in 1984. Among his SF novels is "A Passage at Arms." After working many years for General Motors, Cook now writes full-time. He lives near St. Louis, Missouri, with his wife Carol.
Loading...
or
Not Currently Available for Direct Purchase