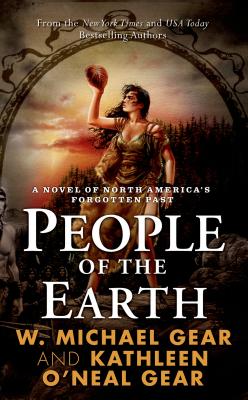 People of the Earth (Paperback)

Set five thousand years ago and ranging through what is now Montana, Wyoming, northern Colorado, and Utah, People of the Earth follows the migration of the Uto-Aztecan people south out of Canada. It is the unforgettable tale of a woman torn between two peoples and two dreams, of the two men who love her and the third who must have her, and of the vision given to the peoples long ago by the spirit of the wolf.

New York Times and USA Today bestselling authors and award-winning archaeologists W. Michael Gear and Kathleen O'Neal Gear bring the stories of these first North Americans to life in this and other volumes in the magnicent North America's Forgotten Past series.

Praise For People of the Earth: A Novel of North America's Forgotten Past…

“A novel of suspense as well as a book to give you joy--and goosebumps....Knowledge illuminates even the smallest background detail yet never gets in the way of a great adventure tale, throbbing with life and death...."The Gears show us an entire people shaped by spiritual values and thoroughly developed belief system. For this reason, as well as the fascination of their irresistible cast of characters, People of the Earth is the most convincing reconstruction of prehistory I have yet read. I shall read it again. It is a book to enjoy more than once.” —Morgan Llywelyn